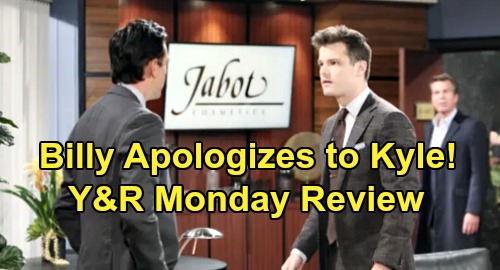 The Young and the Restless spoilers review for Monday, November 18, teases that Kyle Abbott (Michael Mealor) will clash once again with Billy Abbott (Jason Thompson). He’ll overhear Billy on the phone, having just made a unilateral, and risky, business decision. Kyle will blast him for letting his ego drive his decisions, and after their typical back-and-forth with Billy berating Kyle about his lack of experience, Kyle will walk out.

Later, Billy will chat with Victoria Newman (Amelia Heinle) at Crimson Lights, and she’ll note that he’s keeping his cool despite Adam Newman (Mark Grossman) being in the establishment at the same time. But Billy will worry that perhaps he’s displacing his anger onto Kyle. He’ll see his psychiatrist later about it, and she’ll point out that his risky behavior existed before Delia Abbott (Sophie Pollono) died, so that he can’t blame everything on his grief.

Billy will have an insight that he might be self-sabotaging, and he’ll go to Jabot and apologize to Kyle for riding him too hard. He’ll even agree with Kyle that his shapewear idea for Jabot – an idea that he previously dismissed – is a risk worth taking. Kyle will be skeptical and won’t know where any of this is coming from, and Billy will admit that he hasn’t always dealt with the family legacy well, but that he’s trying to be better.

Meanwhile, on the new episode of Y&R on Monday, November 18th, Chance Chancellor (Donny Boaz) will visit with a hostile Devon Hamilton (Bryton James). Devon will be peeved that Chance never returned his messages, and Chance will explain that he was working undercover. He’ll tell Devon that he never hired Amanda Sinclair (Mishael Morgan), and Devon will be upset that he made a life-altering decision based on a lie.

Devon will then summon Cane Ashby (Daniel Goddard) for answers. Cane won’t like Devon’s hostility and will insist that the new will pages are authentic. Jill Abbott (Jess Walton) will then call Cane with news that she’s in the Maldives tracking down Colin Atkinson (Tristan Rogers). Chance will immediately book a flight to the Maldives, which will surprise Cane, and Devon will continue to fume.

Of course, Devon really has no one to blame here but himself. After all, there was no legal reason for him to fork over close to $2 billion to Cane in the first place. He did that on his own, based on the will authenticator’s word. Has anyone even considered the possibility that the woman who authenticated the new will pages could have been someone hired by Colin as part of his scheme to undermine Devon? Devon really made a bad move.

Finally, Adam and Connor Newman (Judah Mackey) will return home from the office of a trauma specialist, who tried but failed to get through to Connor. Connor will have refused to talk with the specialist, and Adam will tell him that he doesn’t have to talk to anyone if he doesn’t want to. He’ll ask Connor what would help him, and Connor will say that he wants Adam and Chelsea Lawson (Melissa Claire Egan) back together.

Adam will explain that Chelsea is just a phone call away and that they’re both there for him. Adam will suggest that they go get a giant cookie and invite a friend of his over. They’ll head to Crimson Lights for the cookie, and while there, they’ll invite Sharon Newman (Sharon Case) over to the penthouse. Sharon will agree, and she and Connor will play together while Sharon gets him talking about the hostage standoff.

Connor will arrange the toys in a way to show that his parents protected him during the ordeal. He and Sharon will talk about it a little bit, then Connor will go upstairs. Sharon will tell Adam that Chelsea should be there, too, for support. Adam will explain that Connor wants them back together, and Sharon will say that this is normal and that it represents security to him. Connor will return and say that he wants to see his mom. Adam will call her, and Chelsea will agree to come over.

One wonders whether all of this will lead to a Chelsea/Adam reunion down the road. Connor seems to need a lot of support right now, and it makes sense that he’d want to be with his mother, who has been the main source of support for almost all of his life. It probably won’t be too long before Chelsea moves in – even as a temporary situation for Connor. And of course, once she’s there, it will probably be pretty difficult for her to leave.