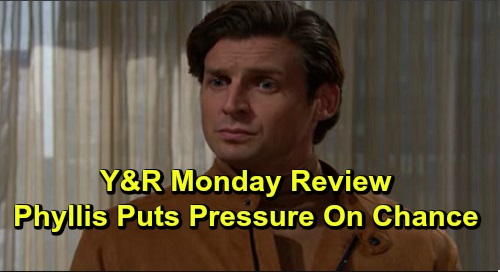 The Young and the Restless spoilers review for Monday, November 18 tease that Phyllis Summers (Michelle Stafford) will agitate Adam Newman (Mark Grossman) and Chance Chancellor (Donny Boaz). She’s just entered Adam’s penthouse uninvited and she’ll pour herself some wine and insist that she has some questions for Chance. She’ll go on about threats from within and after hemming and hawing around, she’ll ask Chance if Chelsea Lawson (Melissa Claire Egan) is a liability for her.

Phyllis will be particularly interested in whether there’s more to the story concerning Chelsea, but Chance will refuse to share information with her about the official investigation. Phyllis will then steer the conversation to having seen Adam and Chance together in Las Vegas. She’ll ask if Chelsea was there and if she met Simon Black (Jeffrey Vincent Parise) there.

Adam will then chime in that Phyllis should ask Chelsea these questions, and he’ll throw her out of the penthouse. Afterwards, Adam will thank Chance for his heroics at The Grand Phoenix, and Chance will worry about Phyllis, but Adam will insist that she was fishing and knows absolutely nothing about what happened in Las Vegas. Chance will then say that it wouldn’t be good for them if she finds out what really happened in Las Vegas. Adam will say that he’ll handle Phyllis.

So, what could have happened in Las Vegas between Chance and Adam that is such a secret? Previously, it seemed that the two might have been in cahoots to orchestrate the challenge on Katherine Chancellor’s (Jeanne Cooper) will, but Chance has been adamant that he’s not involved in that, and of course he didn’t even know Amanda Sinclair (Mishael Morgan). It seems that Chance and Adam had some other involvement, but what could it be?

Meanwhile, on the new episode of Y&R on Monday, November 18, Nikki Newman (Melody Thomas Scott) and Jack Abbott (Peter Bergman) will be busy strategizing for Nick Newman’s (Joshua Morrow) campaign. The incident at The Grand Phoenix will have garnered a lot of bad press for Nick, and Nikki and Jack will try to figure out how to handle it. Victor Newman (Eric Braeden), who will be there too, will be more worried about the damage done to Nick than to his campaign.

Speaking of Nick, he’ll be at his place on the phone with a reporter who has a million questions about The Grand Phoenix ordeal. Nick will insist to the reporter that he’s continuing with his campaign, and it will get tense. Nick will be frustrated with the whole situation, and he and Chelsea will consider the ramifications of all the questions that the reporters and the police are going to have, which could include jail for Chelsea.

Chelsea will want to make things better for Nick, and she’ll decide on impulse that she wants to go outside and tell all the news media the truth, so they’ll know that Nick didn’t do anything wrong. But Nick will disagree, and he’ll worry that if she tells the truth, then it will end up reflecting on his judgment. Chelsea will be beside herself, and Nick will tell her to stop beating herself up.

Later, Nick will tell Chelsea that he’s made a decision. He’ll call Jack, who will still be at the ranch with Victor and Nikki. Jack will put Nick on speakerphone, and Nick will tell them all to stop strategizing because he’s made the decision to drop out of the race and that he will put out a statement saying he’s stepping back to focus on his family.

Of course, this will probably put a huge strain on Nick and Chelsea’s relationship, and even though the public scrutiny for Nick may be over, Chelsea is still going to have to face the music about her ordeal with Simon. Given that the Feds ended up seizing the dirty money that she received from her late husband, it seems like it will only be a matter of time before they connect her to that cash. We’ll see if she comes out of this unscathed.