The Young and the Restless Spoilers: Week of November 18 – Alarm Bells for Devon – Jack Suspicious of Billy – Chaos Hits for Cane 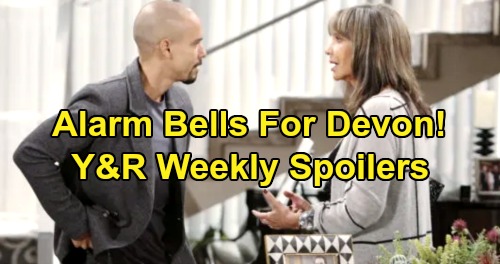 The Young and the Restless (Y&R) spoilers for the week of November 18-22 tease that some exciting developments are coming up in Genoa City. First, let’s talk about Adam Newman (Mark Grossman) and his priority right now. Connor Newman’s (Judah Mackey) well-being comes first for Adam, so he’ll undoubtedly worry about how his son’s coping.

Y&R fans know Connor just went through a pretty traumatic experience at the Grand Phoenix. Between the hostage crisis and all the other chaos this kid’s endured, it’s clearly taking a toll. Adam and Chelsea Lawson (Melissa Claire Egan) will continue to be there for their son, but they’ll hope Sharon Newman (Sharon Case) can be there for Connor, too.

Sharon agreed to help Connor with his struggles, so Adam will open up to her in the week ahead. They’ll probably discuss some strategies Connor can use to get through this bump in the road. Sharon will reassure Adam and try to keep some boundaries in place. Even so, Sharon will like seeing this mature, caring side of Adam. She seems content with Rey Rosales (Jordi Vilasuso) right now, but it’d be nice if Sharon and Adam could be true friends.

Connor will eventually battle some stomach pains – or so the boy will claim. It might be a ploy to push Chelsea back in Adam’s direction, but he’ll get what he wants either way. Chelsea will move out of Nick Newman’s (Joshua Morrow) place and into the penthouse with Adam and Connor. As you can imagine, that’ll leave things strained between Nick and Chelsea. That’s especially true since Chelsea derailed Nick’s campaign with her Simon Black (Jeffrey Vincent Parise) scandal.

Meanwhile, Phyllis Summers (Michelle Stafford) will do what she does best: snoop. Part of Phyllis is digging because she wants to regain full ownership of the hotel, but another part of her is just a busybody. If there’s a secret to uncover, you can bet Phyllis always wants to know what it is. Of course, Adam and Phillip “Chance” Chancellor IV (Donny Boaz) just so happen to have a big one!

Chance will worry about keeping Phyllis in the dark, but Adam will think he can handle the pest. He doesn’t view Phyllis as a real threat, but perhaps he’s underestimating her. Over with Billy Abbott (Jason Thompson), he’ll catch Jack Abbott (Peter Bergman) off guard. Billy’s aggressive and reckless side has been starting to bubble up more and more lately. Jack may finally take notice and suspect something’s amiss.

Elsewhere, Devon Hamilton (Bryton James) will react to a troubling SOS call from Jill Abbott (Jess Walton). She’ll be on a mission to track down Colin Atkinson (Tristan Rogers) and grill him about Katherine Chancellor’s (Jeanne Cooper) will. Jill will make a wild discovery, and Cane Ashby (Daniel Goddard) will find himself mixed up in all the drama. He’ll face his fair share of chaos as this mystery unravels.