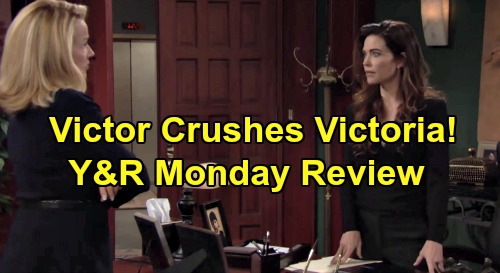 The Young and the Restless spoilers review for Monday, October 7, tease that Victor Newman (Eric Braeden) will bungle some major relationships within his family, all the while oblivious to what he’s doing, or that his actions are alienating the people he loves. First off, he’ll track down Summer Newman (Hunter King) while she’s at the Abbott estate getting some much-needed support from Jack Abbott (Peter Bergman).

Of course, all Summer will really need is some space from the Newmans, but Victor will insist on forcing her into a conversation. And in typical “Victor’ fashion, he’ll talk all about himself and why he needed to do what he did, rather than validate her or really listen to her when she tells him how much she grieved him and was hurt by his big lie. He’ll be in total self-justification mode, and Summer will storm out of the house.

Then, Victor will unilaterally decide that he’s going to return to being CEO of Newman Enterprises and bump Victoria Newman (Amelie Heinle) out of the position, putting her back to being COO. Nikki Newman (Melody Thomas Scott) will immediately recognize this as a terrible idea, and not a move that will foster family unity. She’ll be worried about how Victoria will react, but Victor will dismiss her concerns.

As it turns out, Victor will end up telling the head of HR at Newman Enterprises about his plan to return as CEO, and that information will get leaked. Later, Victoria will be attending a public event – the reception for the opening of Nick Newman (Joshua Morrow) and Devon Hamilton’s (Bryton James) New Hope building – when she gets a message on her phone. She’ll look completely distraught.

A bit later, Victor will show up at the event, and Victoria will approach him, saying that she was just asked to comment on a rumor that he’s returning to Newman Enterprises as CEO. She’ll be immediately and visibly upset when Victor confirms that it’s not a rumor. She’ll lash out, with Nikki and Nick standing by watching the whole scene go down.

Victoria will tell her father that the whole thing is humiliating, and that that she’s been the picture of loyalty and doesn’t deserve to be demoted like this on a whim. She’ll also accuse him of putting her in the position just to get at Adam Newman (Mark Grossman) before she walks out of the event. Nick will then proceed to tell his dad “nice job.” Victor will think that Victoria will get over it, but Nick will disagree and say it’s not right.

Finally, back at the Newman CEO office, Victoria will look angrily at her father’s portrait, then pick up a letter opener and throw it, spearing the portrait. She’ll say, “You’re not getting away with it this time, Dad.”

Clearly, there’s a big disconnect between Victor and the rest of his family. He seems to think that he can bring everyone together by projecting a strong, self-assured image, and trying to take charge with Summer and stepping back into Newman Enterprises are a part of that. But he’s completely failing to see the consequences of his actions on others, and the common thread between the Summer situation and the Victoria situation is that he thinks they’ll both “get over it.”

But the more he barrels forward with his usual way of handling crisis situations, which is to expect everyone else to tough things out, the more he’s alienating his family. If he’s not careful, then soon there will be no one left to either run Newman Enterprises (besides him) or to invite over for family dinners, because he’ll have pushed everyone away.

Meanwhile, on the new episode of Y&R on Monday, October 7, Chelsea Lawson (Melissa Claire Egan) will get a little assistance from an unlikely source. She’ll be having trouble with Connor Newman (Judah Mackey), who will be shutting Chelsea out and isolating. Nick will suggest that she talk with Sharon Newman (Sharon Case), who’s got some expertise in getting kids to open up. Chelsea will initially balk, but she’ll later call Sharon.

Sharon will think that Connor is likely cutting off communication as a way of gaining control over a tough situation and protect himself emotionally. She’ll try to talk with him, with no real luck, and Chelsea will again consider taking Connor and leaving Genoa City, but Sharon will ultimately talk her out of it.

Of course, Connor is yet another family member victim of Victor’s big plan. Sure, Victor isn’t responsible for Adam’s choice to leave and devastate Connor, but he did set things in motion that resulted in Adam leaving. Plus, Victor allowed Connor to grieve his loss unnecessarily. We’ll see whether Connor is able to recover anytime soon, but for the time being it looks like things will be a tough go for him and Chelsea.