BY Heather Hughes on September 13, 2019 | Comments: one comment
Related : Soap Opera, Spoiler, Television, The Young and the Restless 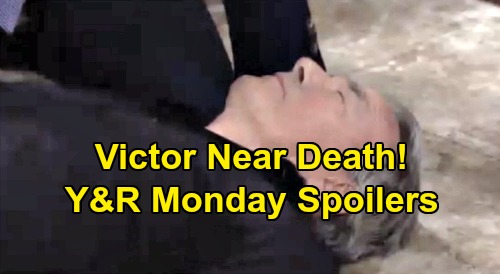 The Young and the Restless (Y&R) spoilers for Monday, September 16, reveal that Jack Abbott (Peter Bergman) will continue his mission. He’s hoping to get a grip on what he wants out of life, so some time away from Genoa City will be a good thing. Jack doesn’t feel fulfilled, but he’s not sure why that is. He just needs a chance to figure out what’s missing and find a new path.

It turns out Jack will get an ally in his quest for perspective and purpose. Sharon Newman (Sharon Case) is also trying to reboot her life, so Y&R will bring these two together. They’ll end up at the same desert retreat, so Jack and Sharon will do some reconnecting. They’ll realize how much they’ve missed each other as they open up and recognize their problems.

Sharon will push Jack beyond the surface level as he describes what he’s going through. He’ll admit he’s gained a deeper understanding of Dina Mergeron (Marla Adams) lately. Jack used to blame Dina for abandoning the family, but he’s starting to see she had her reasons. He’s dealing with the same sense of unfulfillment and wondering if John Abbott’s (Jerry Douglas) focus on work drove Dina away.

Jack will add that his parents’ romantic issues led to a desire to prove himself. He wanted to overcome their obstacles in his own relationships, but he’s faced disasters at every turn. Since Sharon is the queen of romantic disasters, she’ll totally get it. Of course, Sharon was married to Jack once upon a time. That marriage was brief, but Sharon will still tease Jack about being one of his mishaps along the way.

Jack and Sharon are both in a new chapter, so it’ll be interesting to see where this leads. Could a romantic reunion happen or is a renewed friendship all they’ll have in mind? The Young and the Restless spoilers still suggest Sharon will lean toward Rey Rosales (Jordi Vilasuso) this fall, but things could get complicated.

Back in GC, Billy Abbott (Jason Thompson) will tackle his issues and try to get to the heart of the problem. Victoria Newman (Amelia Heinle) will help as Billy makes some painful admissions and worries about what’s next. He’ll be concerned about this other dark person that’s within him. Billy will fear he can’t get that person out, but Victoria will feel confident he can.

At some point in the week ahead, Billy will imagine Delia Abbott (Sophie Pollono) as a young woman. He’ll have an opportunity to talk to her and hopefully work through his lingering grief. Perhaps if Billy can truly let Delia go, he’ll be able to let go of his Adam Newman (Mark Grossman) vendetta, too.

Speaking of Adam, he’ll be with the rest of the Newman clan as they await Victor Newman (Eric Braeden) updates. Victor collapses and loses consciousness in Friday’s episode, which leaves him without a pulse. He’ll be rushed to the hospital on Monday, but Nick Newman (Joshua Morrow) will think it’s too late. After Nick declares that their dad’s gone, he’ll hold Adam responsible.