The Young and the Restless Spoilers: Nate & Elena’s Blossoming Friendship Pushes Boundaries – Will They Wind Up Together?

BY hellodrdavis on September 30, 2019 | Comments: 3 comments
Related : Soap Opera, Spoiler, Television, The Young and the Restless 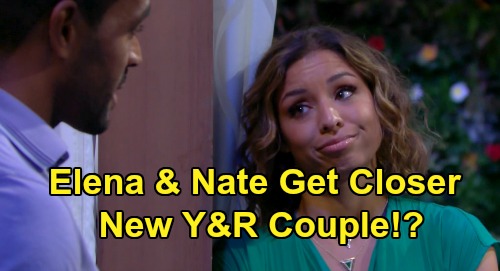 The Young and the Restless spoilers tease that Elena Dawson (Brytni Sarpy) has fit right into the Genoa City scene during the past several months. As Y&R viewers know, Elena arrived in town earlier this year as the caretaker for Ana Hamilton’s (Loren Lott) father, Jett Slade (Gilbert Glenn Brown). Elena and Devon Hamilton (Bryton James) eventually got close, and now they’re living together as a couple and seem quite happy.

And as a testament to the strength of their relationship, Elena seems to be unfazed by the arrival of Amanda Sinclair (Mishael Morgan), who is a dead ringer for Hilary Hamilton (Mishael Morgan). That might be enough to rattle some women, but Elena seems to be taking it all in stride. Sure, she’s not happy about Amanda causing Devon distress, but she sure doesn’t seem to be threatened by the situation. She and Devon seem pretty solid.

Still, we can’t help but notice something that seems to keep coming up on the show, and that’s the serious bond that has developed between Elena and Nate Hastings (Sean Dominic). Now, we know that Elena is with Devon and Nate is with Abby Newman (Melissa Ordway), and the two couples seem to be happy and content, but we’ve also noticed that Elena and Nate are close in their own right.

The two share their medical careers in common, and they’ve comforted each other more than once about issues with their respective patients. At one point, Elena lost a patient, and Devon didn’t really know how to help her. Nate, on the other hand, was able to put the situation into perspective for Elena and talked her down. We’ve also seen Nate and Elena share their breaks from the hospital together and talk about the things going on in their lives. Clearly, they’re great friends.

But could they wind up being more than friends down the line? The two really seem to have chemistry with each other that just lights up the screen, and they’d make an attractive couple if they ever were to get together. But more importantly, they really seem to care for each other, and their friendship runs deep. We wouldn’t be surprised if one day they wake up and realize that they have feelings for each other, even though they didn’t see it coming.

Of course, if that were to happen, then it would certainly cause Devon and Abby some serious heartbreak. Right now, it seems that neither Devon nor Abby is concerned about the closeness between Elena and Nate, and maybe nothing will ever happen there, but we think we see a spark between the two doctors.

What do you think? Do you think Elena and Nate could wind up getting together? Stay tuned to the CBS soap and don’t forget to check CDL often for the latest Young and the Restless spoilers, updates, and news.