BY Heather Hughes on September 30, 2019 | Comments: one comment
Related : Soap Opera, Spoiler, Television, The Young and the Restless 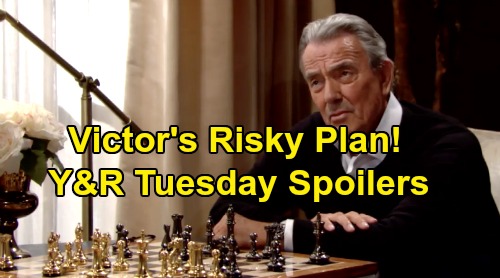 The Young and the Restless (Y&R) spoilers for Tuesday, October 1, tease that Victor Newman (Eric Braeden) will reveal a risky plan. He may have to shift strategies since Adam Newman (Mark Grossman) is so adamant about leaving town. Will Victor do something drastic to stop him?

We’ve also got the cops to consider. They should be closing in on Adam soon since the pharmacist got caught trying to leave the country. She told a very different tale once her immunity deal was in jeopardy, so it sounds like she ratted Adam out. Victor’s trap is turning into quite a mess, so he’ll have to take charge and figure out how to handle this nightmare.

Over with Phyllis Summers (Michelle Stafford), she’ll rush to Summer Newman’s (Hunter King) defense. Y&R viewers know Phyllis always has her daughter’s back. Right or wrong, Phyllis tends to be firmly in Summer’s corner. In this case, Summer’s actions may be perfectly justified. It’ll be interesting to see what Phyllis goes to bat about this time.

There’s a chance this could involve something at the Grand Phoenix. Summer’s been working on collaborations through her work at Jabot, so there could be some clashing. Of course, this could also be another round of drama with Theo Vanderway (Tyler Johnson). They seemed to reach an understanding during their last chat, but they could face a setback if Summer cozies up to Kyle Abbott (Michael Mealor) again.

This could even be about Victor’s faked death if Summer gets hit with the truth. It looks like that bombshell won’t strike just yet, but you can bet Phyllis will be in Summer’s corner when it does. The trouble is Summer may turn against her mom for her alliance with Adam. Summer’s bound to feel alone once secrets start coming out and she realizes the depths of everyone’s deception.

Meanwhile, The Young and the Restless spoilers say Cane Ashby (Daniel Goddard) will face wild accusations. On Monday, Cane inherits the bulk of Katherine Chancellor’s (Jeanne Cooper) fortune – at least according to the new will pages. He’ll likely deny knowing anything about this on Tuesday, but Devon Hamilton (Bryton James) won’t be so sure he buys it.

Cane could’ve easily cooked up a scam with Chance Chancellor. His past isn’t exactly squeaky clean, so Devon won’t have a problem believing Cane is capable of plotting against him. As conflict erupts between Cane and Devon, Amanda will get caught in the middle.