BY Heather Hughes on September 29, 2019 | Comments: one comment
Related : Soap Opera, Spoiler, Television, The Young and the Restless 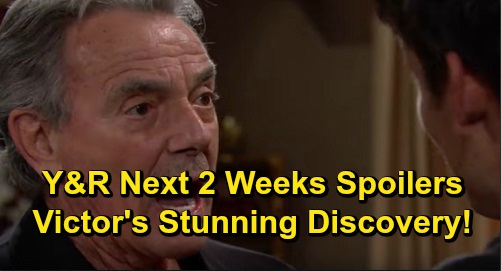 The Young and the Restless (Y&R) spoilers for the next two weeks tease that some surprises are coming up in Genoa City. During the week of September 30-October 4, Nick Newman (Joshua Morrow) will infuriate Chelsea Newman (Melissa Claire Egan). He’ll reveal the plan to trap Adam Newman (Mark Grossman) and leave Chelsea livid over how all this has affected Connor Newman (Judah Mackey).

Once Chelsea cools off, Nick will try to talk to her and explain his thought process. He may assure Chelsea this plot was coming from a protective place. However, Chelsea just won’t buy that this was really about watching out for Connor. She’ll think it was about vengeance, so she’ll stand her ground and keep pushing Nick away.

While Nick remains in the doghouse, Adam will stick to his goal. He’ll insist on leaving town – much to Victor Newman’s (Eric Braeden) dismay. Victor will try another tactic as he works to restore his family, but that could go against whatever Nikki Newman (Melody Thomas Scott) has up her sleeve. She’ll take control of the situation in the week ahead, so Y&R fans can expect Nikki to get fierce!

Speaking of getting fierce, that’s exactly what Devon Hamilton (Bryton James) will do with Cane Ashby (Daniel Goddard). Cane will inherit Katherine Chancellor’s (Jeanne Cooper) fortune according to the new will pages, so Devon will think this has scam written all over it. He’ll wonder what Cane’s trying to pull here.

Cane will surely deny any involvement in a scheme, but will that be true? This plot certainly seems like Colin Atkinson (Tristan Rogers) would be wrapped up in, but Cane may not be as innocent as he lets on. His actions will ultimately leave Phyllis Summers (Michelle Stafford) intrigued – and we all know you usually have to be shady to intrigue Phyllis!

During the week of October 7-11, Cane will find himself in tricky territory. He’ll face another round of backlash, so it’s possible details about his involvement will come to light. As for Phyllis, she’ll grow more interested in Amanda Sinclair (Mishael Morgan) and what she really stands to gain from all this. Phyllis will apparently suspect there’s more than just money motivating Amanda.

Does Amanda have a deeper agenda of her own? The Young and the Restless spoilers say fans will learn more about this character as her storyline moves along, so there are bound to be some shockers. Meanwhile, Victoria Newman (Amelia Heinle) will hold firm on a decision. That may involve Adam’s takedown and her refusal to soften if Victor has that in mind.

Finally, Victor will discover something stunning. Will Adam do something that makes Victor see him in a new light? That’s a possibility to consider. Then again, perhaps Victor will find out Billy Abbott’s (Jason Thompson) the one who tried to run Adam down. Victor ordered someone to find out everything he or she could, so maybe the bombshell will finally hit.