The Young and the Restless Spoilers: Shady Cane Revealed as Amanda and Chance’s Secret Partner – Devon and Lily’s Wrath Awaits 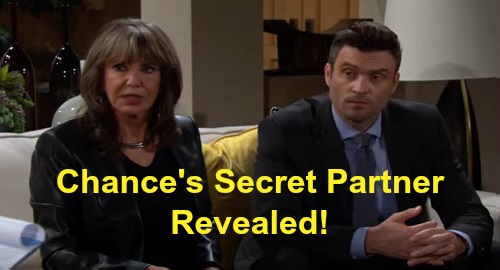 The Young and the Restless (Y&R) spoilers tease that a mystery will unravel on the CBS soap. Unfortunately, Devon Hamilton (Bryton James) isn’t going to like the answers he gets – and you can bet Lily Winters (Christel Khalil) won’t either. It looks like Cane Ashby (Daniel Goddard) is mixed up in all this Katherine Chancellor (Jeanne Cooper) will drama, so that’s going to bring major conflict soon enough.

Jill Abbott’s (Jess Walton) been struggling to believe Chance Chancellor would be up to something so shady. She can’t make sense of any of this, but it should make even less sense once she learns Cane’s involved. It may not make much sense to Y&R viewers either, but there’s actually an easy explanation: Cane needs a story and the show needs drama!

The Young and the Restless spoilers say Devon will blame Cane – most likely for putting this in motion and bringing Amanda Sinclair (Mishael Morgan) into it. Chance might lead Devon to this conclusion through Jill. If it’s true, Cane had to know Amanda looked just like Hilary Hamilton (Mishael Morgan), so it’s pretty twisted that he’d be involved here. What happened to all that talk about Cane getting on a better path and trying to do good in the world?

Cane has thrown all that out the window unless things aren’t as they seem. It’s possible Cane’s motives are more complicated under the surface, but he’ll certainly be in hot water. The Young and the Restless spoilers say Lily is set to make a comeback, so this could be what prompts her return.

Y&R fans know Lily’s battled serious guilt over her role in Hilary’s death. She’s sure to be furious if she realizes Cane had anything to do with Amanda showing up on Devon’s doorstep. Sending someone who looks just like Devon’s late wife is downright sick! Of course, Cane may be full of excuses and explanations. It’ll be interesting to see how he handles all the criticism that’s headed his way.

The Young and the Restless spoilers say Devon’s world will crumble thanks to this chaos, so let’s hope Elena Dawson (Brytni Sarpy) can help him pick up the pieces. What do you think about Cane apparently being Chance and Amanda’s secret partner? We’ll give you updates as other Y&R news comes in. Stay tuned to the CBS soap and don’t forget to check CDL often for the latest Young and the Restless spoilers, updates and news.