The Young and the Restless Spoilers: Nate Needs New Romance, Falls For Amanda – Could Devon Wind Up In Y&R Love Triangle?

BY hellodrdavis on October 27, 2019 | Comments: one comment
Related : Soap Opera, Spoiler, Television, The Young and the Restless 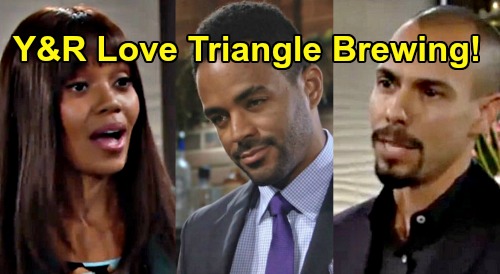 The Young and the Restless spoilers tease that Nate Hastings (Sean Dominic) is at a crossroads. As Y&R viewers know, he recently broke off his relationship with Abby Newman (Melissa Ordway), largely due to their very different perspectives on Victor Newman’s (Eric Braeden) recent death ruse. Abby supported the choice her father made to fake his death, whereas the whole thing really unnerved Nate. But now that Abby and Nate are through, what’s next for him?

Well, Y&R viewers have noticed that Nate’s taken a bit of an interest in Amanda Sinclair (Mishael Morgan) lately. In trying to help fish for information for Devon Hamilton (Bryton James), Nate has spent some time getting to know Amanda, and the two seemed to hit it off pretty well, even though Amanda could see right through Nate’s efforts. Still, she entertained most of Nate’s questions and seemed to interact well with him over a friendly game of pool.

Y&R spoilers also say that Nate will soon find an ally in a leading lady who isn’t Abby. And since there really aren’t any other available leading ladies for Nate other than Amanda and Phyllis Summers (Michelle Stafford), who’s not on Nate’s radar, it’s likely that the leading lady will end up being Amanda.

But do Nate and Amanda have potential as a lasting couple? They seem to have chemistry together, and they’re both single professionals who were at the top of their classes in medical and law school, respectively. Plus, they have an easy rapport and Amanda certainly gets along with Nate better than she gets along with anyone else in Genoa City right now, since her involvement with the contesting of Katherine Chancellor’s (Jeanne Cooper) will has rubbed a lot of people the wrong way.

But on the other hand, there are still some big mysteries surrounding Amanda. It seemed for a hot minute that the issue of Katherine’s will had been resolved, but then Jill Abbott (Jess Walton) began to suspect that Colin Atkinson (Tristan Rogers) might be running a con on Devon, and that Chance Chancellor (John Driscoll) was never involved like Amanda claimed he was. That, plus Amanda’s comment about “that old jerk” getting her involved in contesting the will probably means that Colin’s behind everything.

And if that’s the case, then it probably means that Amanda has been lying about who her real client is. And none of this will sit well with Nate. After all, if he had a problem with Abby supporting Victor’s death ruse, then he’ll probably have a problem with Amanda helping to bilk Devon out of his fortune. So, that could certainly be an impediment to Amanda and Nate getting together.

At any rate, it will be interesting to see what happens with Nate and Amanda going forward. One wonders if it would cause problems in Nate’s relationship with Devon if he and Amanda got together, given Amanda’s strong resemblance to Hilary Hamilton (Mishael Morgan). Chances are, it wouldn’t be an easy situation to navigate, but Nate needs a good romance, and Amanda could be a positive for him, assuming her role in the whole will issue turns out to be innocent.

Alternatively, there remains the possibility of Devon and Amanda striking up a romance once Katherine’s will issue is resolved, especially if Amanda is not aware of the scam. Could The Young and the Restless be setting up a Devon-Nate-Amanda love triangle?

What do you think? Would you like to see Nate and Amanda together? Do you think Devon and Amanda are destined for romance? Stay tuned to the CBS soap and don’t forget to check CDL often for the latest Young and the Restless spoilers, updates, and news.