The Young and the Restless Spoilers: Neil and Drucilla’s Enduring Love – Unforgettable Y&R Romance and Heartbreak

BY Olivia Marie on February 8, 2019 | Comments: one comment
Related : Soap Opera, Spoiler, Television, The Young and the Restless 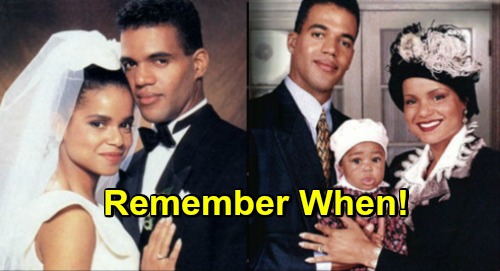 They first met in 1991, when Neil was an executive trainee at Jabot and Dru was a ballerina. But it wasn’t a case of love at first sight, as the pair schemed to break-up Dru’s sister Olivia (Tonya Lee Williams) and her fiancé Nathan (Nathan Purdee) so they could have them for themselves.

When their plan didn’t work out, they turned to each other for comfort and fell in love. Neil and Dru were married in a quiet, subtle ceremony at Katherine Chancellor’s (Jeanne Cooper) estate in March 1993.

But trouble was brewing when Neil’s half-brother Malcolm (Shemar Moore) arrived in Genoa City the following year and it was obvious there was bad blood between the brothers. Malcolm became friends with Dru and started to fall in love with her.

Dru did not return the sentiment, but one evening when she’d taken too much cold medicine, she had sex with Malcolm, initially thinking he was Neil. Weeks later she found out she was pregnant but didn’t know which brother had fathered her child. Dru gave birth to Lily in 1995 and she and Malcolm kept the secret from her husband so Neil could raise Lily as her father.

When Dru became a model shortly afterward, Neil’s old-fashioned values caused a rift in their marriage. He wanted her to be a stay at home mom to their daughter Lily. This angered Dru and she eventually divorced Neil and moved to Paris with Lily to continue her modelling career.

Dru and Lily (Christel Khalil), who was SORASed to age 14, returned to Genoa City in 2002 and she and Neil reunited.

They remarried at Christmastime in 2003 in a dazzling, extravagant ceremony on the Ryukyu Islands of Japan. Star Trek alumni George Takei guest starred as their wedding officiant and Clint Black’s When I Say I Do was their wedding song.

Still happily married, they met Devon (Bryton James) in 2004. Devon was a troubled youth who Lily had befriended and Neil and Dru decided to become his foster parents. They officially adopted him after he turned 18.

All was well with Neil and Dru until 2006, when he found out his brother Malcolm was Lily’s biological father. Neil and Dru separated and he began to fall for Carmen (Marisa Ramirez). Dru was insanely jealous and broke into Carmen’s hotel room, cutting up her clothes. When she was arrested, Neil stood up for his wife, asking Carmen to drop the charges, and Neil and Dru once again found their way back to each other.

But all good stories, and soap opera romances, must come to an end, as did Neil and Dru’s in 2007. Dru and her best friend Sharon (Sharon Case) were standing on the side of a cliff during a photo shoot for NVP Retreats, when they argued with Phyllis (Michelle Stafford).

Sharon and Dru both fell backwards off the cliff. Sharon was rescued but all that was found of Dru was her jacket and she was believed to be dead. Unfortunately, they never got their happily ever after, and so ended the fairy-tale romance of Neil Winters and Drucilla Barber. Come back to CDL for all of your The Young and the Restless spoilers, news and updates.