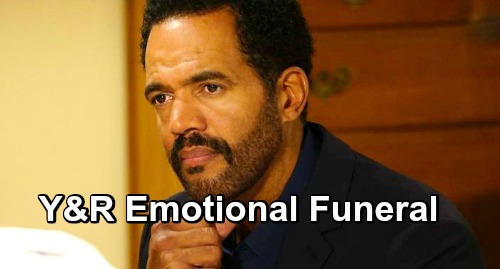 The Young and the Restless (Y&R) spoilers reveal that fans are still reeling over the recent loss of Kristoff St. John (Neil Winters). He was found dead in his home at the age of 52, so this is terrible news that we’re all still trying to process. The cast and crew of the CBS soap certainly feels the same way, but the show must go on. Y&R will eventually have to address St. John’s permanent absence.

It would be disrespectful to recast Neil, so we can surely dismiss that idea. The Young and the Restless has been phasing out the Hamilton-Winters crew a bit in favor of the Rosales family anyway. However, it’s clear that viewers expect a huge sendoff for St. John’s character. Neil was a Y&R staple who deserves to be properly remembered.

It’d be weird for The Young and the Restless to just send Neil off screen permanently after such a tragic end to St. John’s life. In a case like this, fans need to mourn the character along with the actor. The logical approach is to kill Neil off and have his loved ones grieve the loss. It’ll help with closure for those who have acted with St. John as well as viewers who loved Neil.

On social media, Y&R watchers have been speaking out about their hopes for a fitting conclusion. Everyone’s calling on Executive Producer Tony Morina and Head Writer Josh Griffith to do something amazing. St. John’s contribution to the show definitely needs to be acknowledged.

One fan on Twitter said, “I hope Tony and Josh do right by KSJ when killing Neil off and honoring his legacy.” Another viewer said, “#YR needs to give a fitting farewell to Neil Winters. It’s the very least his character deserves.” It makes sense for Neil to die off screen due to some sudden medical crisis or accident. Y&R needs to have a funeral with a big turnout for Neil and give fans what they’re looking for.

Of course, Neil’s death will inevitably be rough on Devon, who’s still struggling to cope with the loss of Hilary Hamilton (Mishael Morgan). Lily Ashby (Christel Khalil) should sink even lower, too. Nevertheless, those would be incredibly realistic story elements.

Sometimes after life hits hard, it hits you even harder. Watching Devon and Lily work through their grief would be painful, but relatable for many. The Young and the Restless spoilers say the Hamilton-Winters fam has a difficult road ahead, so stay tuned.

How do you want the show to handle Kristoff St. John’s death and Neil’s absence? Do you think they should kill Neil off and give him a touching memorial service? We’ll give you updates as other Y&R details emerge. Stick with the CBS soap and don’t forget to check CDL often for the latest Young and the Restless spoilers, updates, and news.