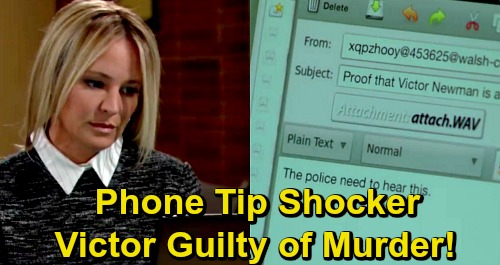 The Young and the Restless (Y&R) spoilers tease that a simple task will lead to a world of trouble for Sharon Newman (Sharon Case). At the police station, she’ll pitch in by going through the tip line emails. Sharon will expect to find run of the mill suspicions, but she’ll uncover a Victor Newman (Eric Braeden) bombshell instead.

Someone will send an email that points to Victor’s guilt. It’ll insist this is proof that Victor is a murderer, so Sharon will open it up nervously. The Young and the Restless spoilers say it’ll be a recording of a private conversation. Nick Newman’s (Joshua Morrow) voice will be heard on this recording as well.

In this audio clip, Nick and Victor discuss getting rid of the murder weapon. They suggest that since J.T. Hellstrom’s (Thad Luckinbill) body is missing, Victor won’t be convicted of the crime. Obviously, all of that will sound pretty incriminating. It’ll make it seem like Nick’s helping Victor cover up J.T.’s murder, so Y&R spoilers say Sharon will be in a state of panic.

Sharon knows how things really went down with J.T., so she’s not keen on letting an innocent person go down for it. That includes someone as ruthless as Victor can be. Sharon won’t like Nick’s involvement here either. She still cares about him, so she’ll worry about handing this info over to Rey.

Nevertheless, Sharon’s job will be on the line. She won’t want to put it in jeopardy or betray Rey Rosales (Jordi Vilasuso) by withholding evidence – even bogus evidence. Sharon will decide there’s only one thing she can do. She’ll choose to go warn Nick before she hands it over. Sharon will provide updates on all the details and hope that Nick gives her his blessing to fulfill her GCPD duties.

The Young and the Restless spoilers say Nick will indeed understand that Sharon’s in a tight spot. He’ll let her know it’s OK to give Rey the proof, but he won’t give up on keeping Victor out of prison. However, Nikki Newman (Melody Thomas Scott) may have other ideas. She’ll inevitably find out about this evidence, which might prompt the shocking admission that’s coming up.

In the end, Nikki just can’t let someone else go down for a death she caused. She’d rather face consequences herself than watch an innocent person rot behind bars! We’ll keep you posted as other Y&R news comes in. Stay tuned to the CBS soap and don’t forget to check CDL often for the latest Young and the Restless spoilers, updates, and news.