The Young and the Restless Spoilers: Neil Winters’ Death Rocks GC – Here’s What To Expect 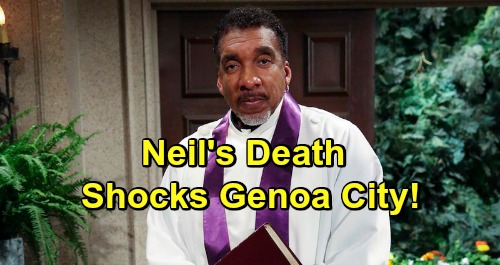 The Young and the Restless (Y&R) spoilers tease that Neil Winters’ (Kristoff St. John) death will rock Genoa City in the coming weeks. Neil’s death will be sudden and take many of his friends and loved ones by surprise. For a brief moment, all the drama between the Newmans and Abbotts will be put on hold to honor a man they all considered family.

Genoa City will learn of Neil’s death. The Y&R spoilers do not say how he dies, only that it is sudden death. The scoop alludes that it might have been a car accident, but that is only speculation, at the moment.

It is not a huge surprise that Devon Hamilton (Bryton James) will take Neil’s death pretty hard – he’s still not recovered from losing his precious Hilary Curtis (Mishael Morgan). He will wonder how he will go on without his father and moral compass. He will recall all the things Neil has done for him and how he and Drucilla (Victoria Rowell) changed his life.

Then, Nikki Newman (Melody Thomas Scott) will unravel. Neil was very special to her. They were close friends and confided in each other often. Y&R spoilers suggest that Nikki may have trouble avoiding a drink to deal with his sudden death.

Jack Abbott (Peter Bergman) and Victor Newman (Eric Braeden) will have a drink together. They will recall moments with Neil and express sadness for his death. They will both shed tears as they struggle to accept their dear friend is gone. The Young and the Restless fans can expect Stan Shaw to play the reverend at the memorial on April 25.

Lily Winters (Christel Khalil) will come home to pay her respects to her dad for his burial. While she filed for divorce from Cane Ashby (Daniel Goddard) last week, Neil’s death could bring them back together.

Everyone will share their love and respect for Neil and they will be shocked he is gone. It will be a beautiful episode that Y&R fans will not want to miss. CBS will give Neil Winters and Kristoff St. John a proper send-off, paying respect to him for the legacy in the soap world he left behind.

In addition to Lily returning, Malcolm Winters (Shemar Moore) will return to pay his respects to his brother. Don’t forget to come back later for more The Young and the Restless (Y&R) spoilers, news, and casting updates!