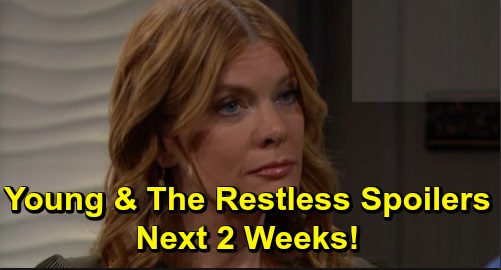 dThe Young and the Restless (Y&R) spoilers for the next two weeks tease that some surprises are coming up in Genoa City. During the week of December 16-20, Chelsea Newman (Melissa Claire Egan) will consider taking legal action against Connor Newman’s (Judah Mackey) school. She’ll hate the idea of telling Connor he can’t return to Walnut Grove, so she’ll talk to Amanda Sinclair (Mishael Morgan) and seek some legal advice.

Amanda will think she thinks Chelsea’s best bet is to look at other schools or possibly homeschool Connor. Chelsea will end up talking to Adam about it later, and they’ll agree that they’re going to figure out what’s best for their son…together. Adam will be hoping for a little more togetherness, but he’ll have to get Nick Newman (Joshua Morrow) out of the way first. He’ll turn to a familiar scheming partner to help him, but that plan will backfire spectacularly.

Phyllis Summers (Michelle Stafford) will be disgusted with Adam for suggesting she should seduce Nick. She’ll warn that he just made a big mistake – one he’s going to regret! Later, Phyllis will contemplate seeking vengeance. She may mull over her new leverage and wonder what her ideal strategy is. Phyllis could certainly make plenty of trouble for Adam by revealing his proposition.

Of course, Phyllis could also want revenge on Abby Newman (Melissa Ordway). Y&R fans will recall that Abby fired her, so Phyllis would have a motive to make her pay. As for Abby and “Chance” Chancellor’s (Donny Boaz) romance, it’ll move right along. Their sweet date will bring them closer and will lead to their first kiss.

Other Young and the Restless spoilers say Billy Abbott (Jason Thompson) will finally find a job. He’ll pass along the news to Amanda, who’ll be happy for him. Billy will confess that he’s a bit nervous about starting fresh, but Amanda will want to get down to business – the business of what exactly this is between them.

Amanda will ask if Billy’s looking to have an affair, so he’ll basically flip the question around on her. They’ll probably be in agreement about keeping things platonic, but Billy will still find himself in some trouble. The Young and the Restless spoilers say Billy will get fed up with denying a big part himself. He’ll be sick of fighting his desire to gamble, so he’ll embrace his inner risktaker and set up some drama.

During the week of December 23-27, Victor Newman (Eric Braeden) and Nikki Newman (Melody Thomas Scott) will host a special family gathering. They’ll celebrate Christmas a bit early since Victoria Newman (Amelia Heinle) will be spending the actual holiday with Billy and the kids.

Over with Jill Abbott (Jess Walton), she’ll get some news that leaves her taken aback. That could involve Billy and Victoria’s trip with the kids, but there’s also a chance it’ll involve the Amanda dirt that Devon Hamilton’s (Bryton James) digging up. Jill would want to be kept in the loop on anything that could connect to the will scam.

Paul Williams (Doug Davidson) and Christine Williams (Lauralee Bell) will also join Lauren Baldwin (Tracey E. Bregman) and Michael Baldwin (Christian LeBlanc) for a fun evening together. They’ll be in for quite a shock by the end of the night. Michael and Lauren will also welcome Fenmore “Fen” Baldwin (Zach Tinker) home soon, so that’ll be a nice Christmas treat for the family. Fen’s been off in rehab, but he’s made great progress and should be a new man by then.

Over with Jack Abbott (Peter Bergman), he’ll have a special present for the Abbott clan. Jack will hope it warms their hearts this holiday season, but that could be tough to do if the tension between Kyle Abbott (Michael Mealor) and Theo Vanderway (Tyler Johnson) remains. Faith Newman (Alyvia Alyn Lind) will also make her way back to town, so Mariah Copeland (Camryn Grimes), Sharon Newman (Sharon Case) and the rest of Faith’s loved ones will enjoy catching up.