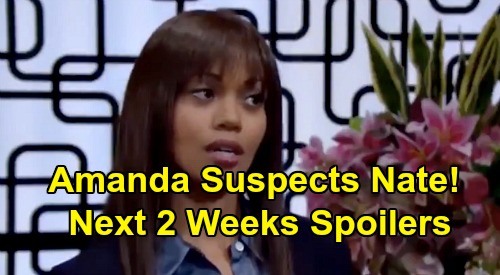 The Young and the Restless (Y&R) spoilers for the next two weeks, October 14-25, tease that some shockers and showdowns are brewing. During the week of October 14-18, Billy Abbott (Jason Thompson) will have to face the music. Victor Newman (Eric Braeden) will summon Billy to discuss the night he tried to kill Adam Newman (Mark Grossman). He’ll demand an explanation, so Billy will offer a heartfelt one.

Billy will admit that after Adam reappeared in town, it really took a toll on him mentally. He thought he was strong enough to handle it, but he’ll admit he wasn’t – at least not at the time. Now Billy’s found a way to deal with his grief and grudges. He’s ready to move on with his life, but he’ll have to convince Victor to let him.

Once Billy pours his heart out, Victor may soften a bit. He still won’t be happy that his son was nearly killed because of Billy’s vengeful move, but he’ll get that losing Delia Abbott (Sophie Pollono) was tough. Victor can relate on some level since he thought Adam was dead before he turned up in Vegas.

Over with Nate Hastings (Sean Dominic), he’ll play a game of pool with Amanda Sinclair (Mishael Morgan). Nate will open up about his own background and push Amanda to do the same. It won’t take her long to grow suspicious. Amanda will accuse Nate of being Devon Hamilton’s (Bryton James) minion. She’ll think Nate’s just trying to dig for dirt and trip her up somehow.

Amanda will be right about Nate’s agenda, but he’ll be doing it on his own – not for Devon. Even so, Nate will want Amanda to believe his heart’s in the right place. He’ll ultimately sell her on the idea somewhat, but Amanda will remain cagey. As for Nate and Abby Newman’s (Melissa Ordway), they’ll face some serious problems this week that could leave their relationship hanging by a thread.

Next, Lola Abbott (Sasha Calle) will have a pregnancy scare. Is she really expecting or will it be a false alarm? Could there be health issues causing Lola’s seemingly baby-related symptoms instead? Regardless, Kyle will get filled in and gush over the possibility of starting their brood. He’ll be excited, but things may not work out as well as he hopes.

Over with Cane Ashby (Daniel Goddard), he’ll make a startling discovery. That should involve who knocked him out and kidnapped him in Vegas. Is Cane’s captor the same person who caused all this will drama? Even if it’s a secret helper instead, there’s a good chance Colin Atkinson (Tristan Rogers) is involved somehow.

During the week of October 21-25, Jill Abbott (Jess Walton) will get a huge shock. Cane will also be stuck in a crisis while Devon has a meltdown. It makes sense that Colin’s involvement would bring all these reactions and shakeups. Lily Winters (Christel Khalil) will make her way back to town and get updates on the chaos, so that’s something to look forward to.

Amanda Sinclair (Mishael Morgan) will decide the jig is up, so she’ll confess the whole story. She’ll want to clear things up and hopefully steer blame away from herself. The Young and the Restless spoilers say Devon will remain full of rage, so Elena Dawson (Brytni Sarpy) will do her best to help.

Meanwhile, Nick Newman (Joshua Morrow) will head off on a mission. He’ll begin a search for Adam, but what’ll be the reason why? Nick might believe Connor Newman (Judah Mackey) isn’t going to get better without his dad around. The kid will pretty much become a full-blown nightmare over the next couple weeks, so Adam will be needed more than ever.

There’s also a possibility that Adam indeed played a role in Katherine Chancellor’s (Jeanne Cooper) will turmoil. Whatever the case, Y&R fans can watch Nick step up. He’ll leave no stone unturned as he works to find Adam and potentially push him to come home.