The Young and the Restless Spoilers Next 2 Weeks: Chloe and Adam Shocker – Victoria and Phyllis Go to War – Victor’s Dying

BY Heather Hughes on June 24, 2019 | Comments: one comment
Related : Soap Opera, Spoiler, Television, The Young and the Restless 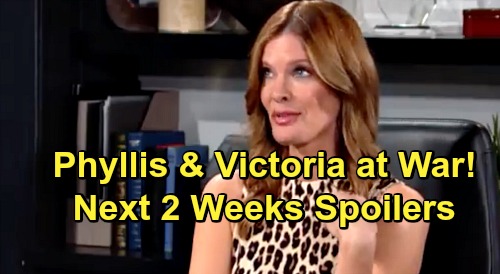 The Young and the Restless (Y&R) spoilers for next two weeks tease that some Genoa City residents will bond while others find themselves at odds. During the week of June 24-28, Victor Newman (Eric Braeden) will officially patch things up with Nick Newman (Joshua Morrow). They’ve been on better terms than usual for a while now, but it’ll be nice to see them make true peace.

Over with Phyllis Summers (Michelle Stafford), she’ll reveal Adam Newman’s (Mark Grossman) hidden connection. After dropping “Chance” Chancellor’s name, Phyllis will ponder the damage she could do with this secret. Adam won’t want anyone to know he’s linked to Chance, so he’ll offer Phyllis the Dark Horse throne. He’ll hope that’ll be enough to pacify Phyllis and keep his secret under wraps.

Meanwhile, Summer Newman (Hunter King) will lash out at her mom before crashing Lola Rosales (Sasha Calle) bridal shower. Abby Newman (Melissa Ordway) will be the one throwing this shindig, so she’ll undoubtedly wish Summer would get lost. However, Lola will urge Summer to stay, which will lead to a shocker. Even Summer herself will be taken aback by her kind gesture.

Celeste Rosales (Eva LaRue) will make her debut at this gathering. It’ll be a big surprise for Lola, who may have mixed feelings soon enough. She’ll like seeing her mom again, but she’ll probably expect Celeste to bring some trouble with her.

Next, Billy Abbott (Jason Thompson) will face a bombshell. His world will be rocked, so maybe he’ll come face to face with presumed dead Chloe Mitchell (Elizabeth Hendrickson). Before that happens, Chloe will have to be a free woman. Adam will plan to release Chloe, but he’ll force Kevin Fisher (Greg Rikaart) to do some extra dirty work first.

The Young and the Restless spoilers say Kevin will ultimately head to Chloe’s location with Adam. Chloe and Kevin will have an emotional reunion, but Adam will soon ask for a moment alone with Chloe. She’ll try to be civil, which is in her best interest since she’ll want to get out of there. Adam will think Chloe needs to cut the nice act, but he’ll admit he’s truly sorry for the pain he’s caused.

Y&R fans can expect Chloe and Adam to understand each other a bit better by the of this conversation. Chelsea’s return will cap the week off, so don’t miss the chaos that brings. During the week of July 1-5, Chelsea will make some angry demands. She’ll support Nick by giving Adam an ultimatum, which should involve a push for Adam to drop his custody suit.

Back with Summer, she’ll risk undoing the progress she made at the shower. It seems Summer will well – or will at least hope to look like she means well. Nevertheless, there’s a chance Summer’s next move could backfire. Kyle Abbott (Michael Mealor) may feel like she’s too involved or manipulating the situation.

Other Young and the Restless spoilers say Victor Newman (Eric Braeden) will take a gamble. It looks like he’ll go through with an experimental drug trial since his treatment is failing and he’s slowly dying from PNH, but he’ll be risking major side effects. Those side effects could certainly take a toll on Victor’s daily life.

Finally, Victoria Newman (Amelia Heinle) will hope to prove she’s worthy of the CEO seat at Newman Enterprises. She’ll play hardball as she works to destroy Dark Horse. Since Phyllis will soon be in charge, that matchup should be interesting!