The Young and the Restless Spoilers: Sizzle Season Begins With Phyllis and Adam – Summer Y&R Character Returns and Couple Remixes

BY Sean O'Brien on June 23, 2019 | Comments: one comment
Related : Soap Opera, Spoiler, Television, The Young and the Restless 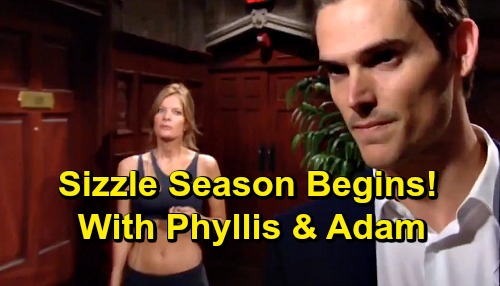 The Young and the Restless spoilers tease that the returns of numerous classic characters, combined with some couple remixes will make the new season sizzle. That’s exactly what this steamer needed, as summer officially begins.

Nick Newman (Joshua Morrow) and Phyllis Summers (Michelle Stafford) were a one-time couple. They share a daughter, Summer Newman (Hunter King), whose first name honors her mother’s last name and the warmest season of the calendar year in the northern hemisphere, where Genoa City, Wisconsin, is located.

But instead of Phick rebooting, Nick and Chelsea Lawson (Melissa Claire Egan) appeared more likely to rekindle their relationship. Yes, Chelsea is said to be married. Whether that proves true, or lasts, if it is the case, will soon be seen.

In any event, Chelsea had been sending Nick text messages since last fall, as viewers came to know. He didn’t respond at first, but has since reached out.

Nick needs Chelsea’s help in fighting his brother’s paternity claim of Christian Newman (Jude and Ozzy McGuigen) off. Adam Newman (Mark Grossman) believes that he’s entitled to full custody of his second-born son, which gives no credit to his brother for having loved and cared for him during the past three years. Thus the potential for an emotional bond to be revived between Chelsea and Nick, who were known as Chick.

Yes, Adam and Chelsea were once in love. Nick was actually driving Chelsea and Connor Newman (Gunner and Ryder Gadbois) to the cabin, where Chadam was supposed to reunite, then be taken to the air strip where Victor Newman (Eric Braeden) had arranged for them to fly off to a new life far from GC.

But Chloe Mitchell (Elizabeth Hendrickson) radically altered those plans, which also appears to have broken Chelsea’s bond with Adam. The Young and the Restless spoilers indicate that Chelsea’s positive feelings for Adam will make a resurgence but whether this is sufficient to overcome the past remains to be seen.

Meanwhile, Sharon Newman (Sharon Case) just entered a serious relationship with Rey Rosales (Jordi Vilasuso), but has been drawn back into Adam’s frantic world. If Chelsea truly is done with Adam, Sharon might be choice three. Three?

Phyllis and Adam were never friends, let alone more than that. But the recast of both characters does enable the increasing possibility that sparks will be seen between Stafford’s revived Red and Grossman’s edition of the newest Adam.

Phadam could become one of the most epic couple’s in recent memory. Their assumed nickname itself is as sharp as the knives Phyllis and Adam have out for everyone. They would be masterful this summer, unless, or until they turned on each other.