The Young and the Restless Spoilers Next 2 Weeks: Kevin Does The Unthinkable – Michael’s Dark Adam Deal – Cane and Traci Go Deeper

BY Heather Hughes on July 7, 2019 | Comments: one comment
Related : Soap Opera, Spoiler, Television, The Young and the Restless 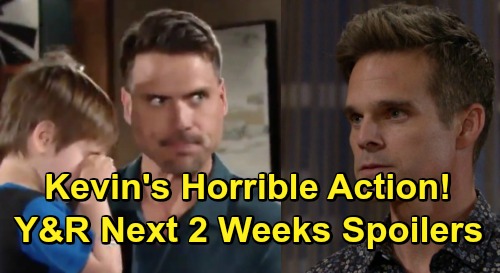 The Young and the Restless (Y&R) spoilers for the next two weeks tease that some shockers and shakeups are brewing. During the week of July 8-12, Adam Newman’s (Mark Grossman) plea will be rejected. Chelsea Newman (Melissa Claire Egan) will push for her freedom instead, but Adam will remain committed to winning her back along with Connor Newman (Gunner and Ryder Gadbois).

In fact, Adam will be willing to destroy anyone who stands in his way. At the moment, Nick Newman (Joshua Morrow) is setting himself up as his brother’s main target. Adam already intended to go after Nick in the custody battle over Christian Newman (Jude and Ozzy McGuigen), but Nick and Chelsea’s reconnection will provide one more reason to fight.

The Young and the Restless spoilers say Kevin Fisher (Greg Rikaart) will get some orders he hates and be forced to do the unthinkable. He’ll object to how dirty Adam wants him to play, but he’ll be forced to do it anyway. Meanwhile, Jill Atkinson (Jess Walton) will make her way back to town – and perhaps in the nick of time! Billy Abbott (Jason Thompson) seems to be on the verge of some dangerous decisions.

Y&R fans can expect Jill to catch up with Billy this week, so maybe she can talk him off the ledge. However, we’d say Jill will only delay the inevitable. Billy’s rage toward Adam is growing, so he may not be able to resist going after him with that gun. At some point, a serious showdown has to hit.

Other Young and the Restless spoilers say Nick will seek help from someone in his past. Could that be Avery Bailey Clark (Jessica Collins)? There’s been some Avery return buzz going on, so it’s possible.

Then again, there may be another face in Nick’s past that could offer assistance. The main thing will be doing whatever it takes to protect himself and the people he cares about. Nick will certainly hope this person can pitch it.

Next, Nikki Newman (Melody Thomas Scott) will spill a shocker. She may tell Jack Abbott (Peter Bergman) or someone else more than she planned about Victor Newman’s (Eric Braeden) health. Over with Rey Rosales (Jordi Vilasuso), he’ll once again voice his frustration over Adam and Sharon Newman’s (Sharon Case) bond. They’re avoiding each other now, but Rey won’t buy that their connection has been severed.

During the week of July 15-19, Rey will change his tune. He’ll soften toward Sharon as they make amends and move forward. Rey may choose to trust in Sharon and their future together, but that just might be a mistake. Adam has a strong pull when it comes to Sharon, so things will remain dangerous.

Nikki will also plan a dinner party that gets out of hand. She’ll invite the family over for the gathering, which may or may not include Adam. Regardless, this bash will be a bust! The Young and the Restless spoilers say nobody will be having fun when conflict and chaos erupt.

Elsewhere, Cane Ashby (Daniel Goddard) will confide in Traci Abbott (Beth Maitland). Will he a bit clearer about his feelings and what he wants? That’d probably help Traci out right about now!

Finally, Michael Baldwin (Christian LeBlanc) will get fed up enough to seek a deal with Adam. He’ll want Kevin out of this mess, so he’ll come up with an agreement that could make it happen. Unfortunately, Michael could land in trouble with Lauren Baldwin (Tracey E. Bregman) if he goes darker and leaves her out of the loop.