BY Heather Hughes on September 15, 2019 | Comments: one comment
Related : Soap Opera, Spoiler, Television, The Young and the Restless 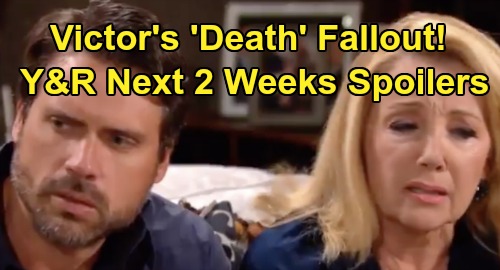 The Young and the Restless (Y&R) spoilers for the next two weeks tease that some bombshells are brewing. During the week of September 16-20, the Newmans will react to Victor Newman’s (Eric Braeden) stunning demise. Of course, it won’t be real. It seems Nick Newman (Joshua Morrow) and Nikki Newman (Melody Thomas Scott) may be in on the plan along with Nate Hastings (Sean Dominic).

However, there’ll be others who appear absolutely crushed like Summer Newman (Hunter King). She definitely won’t have a clue her grandpa’s alive and well. It doesn’t look like Abby Newman (Melissa Claire Egan) will know either. After Victoria Newman (Amelia Heinle) helps Billy Abbott (Jason Thompson) face his inner demons, she’ll also face this devastating blow.

It sounds like this is an Adam Newman (Mark Grossman) takedown plot, but Nick and Nikki may have been wary of including too many people. Whatever the case, Y&R spoilers say Adam will suffer since he’ll believe he killed his dad. Michael Baldwin (Christian LeBlanc) will have a hunch about that, too. He’ll confront Adam as the news spreads and perhaps make some startling accusations.

The Young and the Restless spoilers say Nikki will seek Paul Williams’ (Doug Davidson) assistance later, so he may have to be brought in the loop. Nick will also catch Phyllis off guard, which could mean he’ll reveal the truth. Their daughter will be a mess of grief, so Nick might admit Victor’s death isn’t real. That could leave Phyllis in an interesting position since she’s so chummy with Adam these days.

Over with Devon Hamilton (Bryton James), he’ll believe the future is bright. Devon is eager to keep things moving right along with Elena Dawson (Brytni Sarpy), and he’ll be on cloud nine as he talks to Jill Abbott (Jess Walton). However, a special delivery could be a game-changer. Will it turn Devon’s smile into a frown? It’ll probably tie in with the will challenger, so it may involve trouble.

During the week of September 23-27, Lauren Baldwin (Tracey E. Bregman) will get some startling news. Michael will be the one to pass it along, so what’s this about? Perhaps Lauren will get back from dealing with Fenmore “Fen” Baldwin (Zach Tinker) and finally get brought up speed on Victor’s passing.

Meanwhile, Jill will grow concerned about Billy. Will she be left wondering where he is? Will Victoria let Jill know Billy’s at the boathouse instead? Either way, Jill will have plenty of worries on her mind. Elsewhere, Sharon Newman (Sharon Case) will take her fresh start to the next level. An earlier conversation with Jack Abbott (Peter Bergman) should help Sharon as she tries to find her purpose.

Finally, The Young and the Restless spoilers say Nikki will divulge a stunning secret. Will she admit that Victor’s not dead after all? Who will Nikki confess to? Y&R fans won’t want to miss all the action. We’ll give you updates as other news comes in. Stay tuned to the CBS soap and don’t forget to check CDL often for the latest Young and the Restless spoilers, updates and news.