BY Heather Hughes on October 20, 2019 | Comments: one comment
Related : Soap Opera, Spoiler, Television, The Young and the Restless 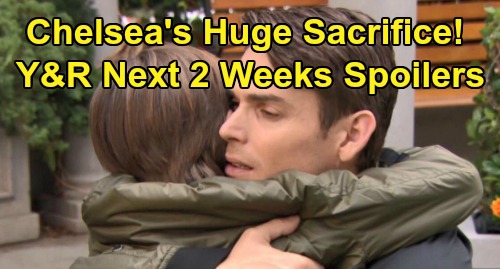 The Young and the Restless (Y&R) spoilers for the next two weeks tease that things are about to heat up in Genoa City. During the week of October 21-25, Sharon Newman (Sharon Case) will go after that fresh start she’s been talking about. She was expecting to experience this new beginning alone, so she’ll be pleased it involves a new beginning with Rey Rosales (Jordi Vilasuso) instead.

Of course, navigating this new chapter will be tricky, but Sharon and Rey will think they can handle it. They learned a lot from their breakup, so they’ll trust that they can face whatever life throws at them now. We’ll see about that! In the meantime, Abby Newman (Melissa Ordway) will know her worth. She’ll refuse to back down on what matters to her – not for Nate Hastings (Sean Dominic) or anyone else.

Abby will hope she can find someone who accepts her for who she is eventually. Family loyalty is a huge deal to Abby, so she’ll want a guy who can respect that. However, Abby won’t be looking to rush into anything. That’s great news since a plot’s underway and Abby really needs to focus on it. She’s been apprehensive about Phyllis Summers (Michelle Stafford) and these security upgrades, but Phyllis has suggested that Abby’s just paranoid.

Nevertheless, Abby should really trust her instincts. Phyllis is indeed scheming, so we’ll see if Abby can uncover the truth. Phyllis just might gain the upper hand this time around. She’ll make a bold move in the week ahead that could result in more power.

Meanwhile, Adam Newman (Mark Grossman) will hear Nick Newman’s (Joshua Morrow) pitch. Nick will insist Connor Newman (Judah Mackey) is acting out because he feels abandoned. Adam will be on the fence until Chelsea Newman (Melissa Claire Egan) calls from the hospital. It looks like Connor’s sudden injuries will be the deciding factor that brings him home.

Over with Cane Ashby (Daniel Goddard), he’ll marvel when he confirms the will pages are authentic. It’ll take some work to make Devon Hamilton (Bryton James) believe it, but he ultimately will. That’ll leave Devon to decide if he’s going to honor Katherine Chancellor’s (Jeanne Cooper) wishes. Devon has no obligation to do so legally, but what about his moral obligation? It’ll certainly be a tough predicament.

Lily Winters (Christel Khalil) will make a GC comeback to support Devon. When he fills Lily in on how much Amanda Sinclair (Mishael Morgan) looks like Hilary Hamilton (Mishael Morgan), she’ll brush it off. Lily will assume Devon’s exaggerating when he insists they look like twins. She’ll see that he’s telling the truth once she meets Amanda and confronts her about how this has affected Devon.

During the week of October 28-November 1, The Young and the Restless spoilers say Rey and Sharon’s romance will heat up. Their reunion will sizzle while Billy Abbott (Jason Thompson) deals with Adam’s homecoming. Y&R fans can expect some fierce threats as Billy’s dark side bubbles up. Victoria Newman (Amelia Heinle) will grow increasingly concerned as Billy struggles to control his anger.

Adam will give as good as he gets, which won’t help matters. Even so, Connor will hopefully settle down with Adam around. He needs his father, so Adam will try to be the one he deserves. Chelsea will make a difficult choice, which will likely involve Connor’s well-being.

If Connor’s still having trouble at Nick’s place, perhaps Chelsea will agree to let him live with Adam – at least for a while. There’s even a chance Chelsea could live at the penthouse, too. Coming together and giving Connor what he needs is most important. Chelsea might think a temporary move-in with Adam would be beneficial for their son.