The Young and the Restless Spoilers: Week of October 21 Preview – Lily Freaks Over Amanda – Cane Proves Will Is Real 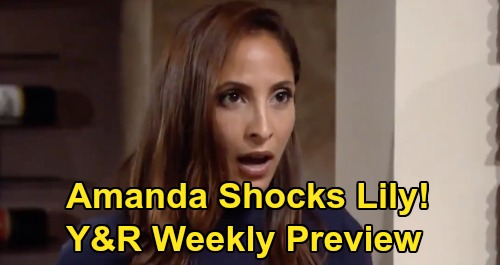 The Young and the Restless (Y&R) spoilers preview for the week of October 21-25 tease that the case surrounding Katherine Chancellor’s (Jeanne Cooper) will is about to heat up. Y&R fans can expect Cane Ashby (Daniel Goddard) to return home with the pages from Vegas. He’ll want to have them authenticated, but Amanda Sinclair (Mishael Morgan) won’t think he should bother. She won’t believe Devon Hamilton (Bryton James) will give up his fortune, even if the pages are real.

However, Cane will move forward with his plan anyway – perhaps at Jill Abbott’s (Jess Walton) urging. She seems awfully determined to find out what Katherine’s true wishes were. The Young and the Restless spoilers say Cane will eventually learn that Katherine’s initials were forged, which makes Devon’s pages bogus.

Of course, we have to wonder who’s authenticating these pages. It’s kind of like DNA labs on soaps. Can anyone really be trusted to do the job right? Someone could’ve easily been bribed here. This is an elaborate scheme, so the person behind this won’t drop the ball at the end. The “old jerk” wanted Cane to score that money, so he surely had this part planned, too.

That old jerk could be Colin Atkinson (Tristan Rogers) or someone else, but the drama will continue in GC without him. The Young and the Restless spoilers say Cane will pay Devon a visit. He’ll look down and suggest there’s nothing he can do legally. If Devon wants to honor Katherine’s true will pages, that’s his choice.

Naturally, Jill will insist that Katherine wanted Cane to have all her money. Why? Who the heck knows! None of this makes any sense, so Devon will be confused as well. Elena Dawson (Brytni Sarpy) will convince him to call Lily Ashby (Christel Khalil) home to help. She’ll talk to Cane and try to get a good grip on the situation. Lily has been lied to by Cane before, so she may try to figure out if he’s in on this.

It looks like Lily will vouch for Cane’s honesty, but only Devon can make the call. Will he give his billions to Cane? Could he potentially offer to split the fortune? The Young and the Restless spoilers say Devon will wrestle over what to do. He’ll be torn between honoring Katherine’s legacy and handing over the money he’s done so much good with. Devon undoubtedly had more ideas on how to give back.

Cane is obviously in the dark on who’s pulling the strings and why, but it seems he’ll want the money. Who could blame him? Nevertheless, guilt-tripping Devon is low and that may be Cane will subtly do. Jill, on the other hand, should have no qualms about giving her opinion! She’ll want to make this right and give Cane the wealth he deserves – at least according to this allegedly authentic will pages.

The Young and the Restless spoilers say Lily will also have a chance to meet Amanda. She’ll take one look at that face and immediately drop a glass. Amanda’s eerie resemblance to Hilary Hamilton (Mishael Morgan) will definitely be unsettling for Lily. She’ll have some questions for Amanda as things get tense.

It sounds like a great week’s ahead in Genoa City. We’ll give you updates as other Y&R news comes in. Stay tuned to the CBS soap and don’t forget to check CDL often for the latest Young and the Restless spoilers, updates and news.