BY Heather Hughes on October 18, 2019 | Comments: one comment
Related : Soap Opera, Spoiler, Television, The Young and the Restless 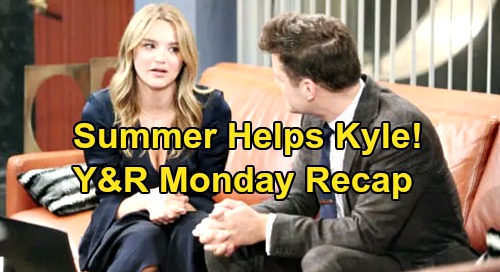 The Young and the Restless (Y&R) spoilers recap for Monday, October 21, teases that Nate Hastings (Sean Dominic) and Abby Newman (Melissa Ordway) will revisit their breakup conversation. Unfortunately, they won’t be able to get on the same page. Abby’s always going to make family loyalty a priority, and she won’t like feeling like her morals are being tested. Since Nate can’t just ignore his conscience, they’ll stick to the split.

Devon isn’t legally obligated to give Cane his fortune, but he’ll assume that’s what Amanda wants. He’ll suggest it would allow her to collect, too. Amanda will think Devon’s real issue here is that she looks like Hilary Hamilton (Mishael Morgan). She’ll get fed up with all the drama and stomp off. That’ll leave Jill to nudge Devon toward acceptance. She’ll think Devon has to at least consider the idea that Cane found the genuine will pages.

At the Grand Phoenix, Rey Rosales (Jordi Vilasuso) will spot Adrian Rosales (Jay Montalvo) flirting with a woman. He’ll confront his father and learn Kyle Abbott (Michael Mealor) gave him money. Nearby, The Young and the Restless spoilers say Theo Vanderway (Tyler Johnson) will eavesdrop. Once Rey blasts Adrian and leaves, Theo will walk over and introduce himself as an old friend of Kyle’s.

Adrian will open up about being kicked out of the house by his kids’ mother and not being able to bond with them. They’ll talk about Lola Abbott (Sasha Calle) before the chat shifts to Kyle. Theo will note that Kyle also had a couple rough years in his upbringing. It certainly seems like Theo’s working an angle here.

At home, Lola will get updates from Rey over the phone. She’ll hang up and lash out at Kyle for giving her deadbeat dad a check. Lola will gripe about Adrian setting himself up at the Grand Phoenix, but Kyle will insist her father won’t stick around.

Later, Kyle will get advice from Summer Newman (Hunter King). She won’t think Kyle should let Billy Abbott (Jason Thompson) get under his skin. Y&R spoilers say Summer will eventually help Kyle with his hunt for a house. She’ll be taken aback when Kyle mentions kids and wants to look for ones in good school districts. Kyle will be grateful for Summer’s recommendations, but she’ll seem to be struggling with her feelings.

At Society, Lola will talk to Abby about her breakup. Abby will think she needs to be with a guy who accepts her for who she is. Afterward, Theo will arrive and approach Lola. He’ll reiterate that he wants to make amends with Kyle, but she won’t think his kitchen visits are the way to go about it.

Theo will assure Lola that she’s one of the few nice people he knows. They’ll establish that they’re on solid ground as Summer waltzes in. She’ll initially launch into a speech about Kyle and what they’ve been up to at Jabot, but she’ll catch herself and offer an apology. However, Theo will insist he’s OK with Summer and Kyle’s working relationship.

Back at the Grand Phoenix, Kyle will try to get rid of Lola’s father. He’ll tell Adrian that having him around is hurting Lola, but Adrian will claim he wants to fix things. Kyle will ultimately rejoin Lola at their apartment, where he’ll show off a house Summer liked. Lola will get the benefits of this particular house, but she won’t think it’s the right fit.

Other Young and the Restless spoilers say Nate will run into Cane, who won’t be sure how he feels about his discovery in Vegas. Once Amanda appears, she’ll take the will pages and grow frustrated since Cane never spoke with Chance Chancellor. Cane will suggest they can get the pages authenticated, but Amanda will feel like it’s pointless. She won’t think Devon will hand anything over even if they’re real.

Devon will try a different strategy when he summons Lily Winters (Christel Khalil) later in the week. Let’s hope Lily can help them figure out what Katherine Chancellor’s (Jeanne Cooper) true intentions were! We’ll keep you posted as other Y&R news comes in. Stay tuned to the CBS soap and don’t forget to check CDL often for the latest Young and the Restless spoilers, updates and news.