The Young and the Restless Spoilers: Traci Risks Heartbreak as Adrian Reels Her In – Protective Kyle Delivers Fierce Warning?

BY Heather Hughes on October 18, 2019 | Comments: one comment
Related : Soap Opera, Spoiler, Television, The Young and the Restless 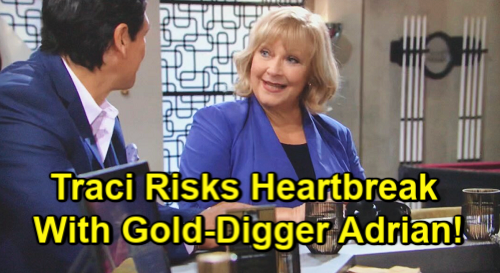 The Young and the Restless (Y&R) spoilers tease that Traci Abbott (Beth Maitland) may be on the verge of finding new love. Some Y&R fans were disappointed when Traci’s romance with Cane Ashby (Daniel Goddard) got nixed. Traci was flattered and touched by Cane’s interest in her, but she decided they should just remain friends. That meant Traci was back at square one in terms of finding a nice match.

It’s better than nothing and perhaps Traci needs someone who will spice up her life anyway. If they paired Traci up with someone caring and trustworthy, it wouldn’t provide many storyline opportunities.

Adrian Rosales And Traci Abbott Pairing Could Bring Some Drama

A Traci and Adrian pairing, however, could certainly bring some drama. So far, Adrian’s just done a little flirting, which led to a toast and a few laughs. It was the kind of scene that typically kicks off a new romantic plot, so it’s worth paying attention to. That’s especially true since Adrian is always trying to score money and made a point to gush over Traci being a best-selling author.

Traci’s made plenty of sweet moolah through her popular books and comes from a wealthy family. Adrian may see dollar signs when he looks in those kind eyes of hers. He probably views her as an easy, gullible mark. Even so, there seems to be part of Adrian that cares about his kids and has remorse over his mistakes. That doesn’t mean he’s a good guy, but maybe he’s not an entirely bad one.

There’s the potential for growth and change here. Plenty of characters have done it over the years, so Adrian might put in the work and show Traci he’s worthy of her. If Adrian and Traci start inching closer, it’s bound to make some waves. Kyle Abbott (Michael Mealor) will be particularly upset about it. He doesn’t trust Lola Abbott’s (Sasha Calle) father and won’t want Traci to get hurt.

Will Lola Abbott Also Deliver Some Kind Of Warning To Her Father?

Kyle may deliver a fierce warning to Adrian at some point. Since Kyle adores Traci like most Young and the Restless fans do, he’ll want to look out for her. Kyle already insisted Adrian shouldn’t hurt Lola again. He may get in Adrian’s face and argue that goes for Traci, too.

Lola has quickly become a beloved part of the Abbott family, so she may pass along a warning of her own. There’ll be serious red flags for anyone who knows Adrian’s history, but will Traci be the one to turn his life around? Will Traci help Adrian get on a new path or will she just get her heart broken?

It’ll be interesting to see where this storyline heads next. The Young and the Restless spoilers say Traci will keep working on her latest project with Jack Abbott (Peter Bergman) as well, so it’s great that she’s getting more airtime. We’ll give you updates as other Y&R news comes in. Stay tuned to the CBS soap and don’t forget to check CDL often for the latest Young and the Restless spoilers, updates and news.