BY Heather Hughes on September 1, 2019 | Comments: one comment
Related : Soap Opera, Spoiler, Television, The Young and the Restless 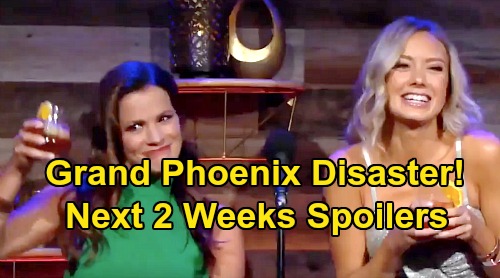 The Young and the Restless (Y&R) spoilers for the next two weeks tease that some suspicions will rev up. During the week of September 2-6, Nate Hastings’ (Sean Dominic) tablet will go missing. He’ll immediately point the finger at Adam Newman (Mark Grossman) – at least when he’s talking to Abby Newman (Melissa Ordway). She’ll agree this has her twisted brother written all over it.

Nate and Abby will draw a logical conclusion about Adam’s latest plan. They’ll fear that Victor Newman’s (Eric Braeden) health will be used against him! That’s exactly what Adam has in mind since he’ll urge Phyllis Summers (Michelle Stafford) to hack the tablet. The Young and the Restless spoilers say Phyllis will fall back on old habits, so that likely involves using her old hacking skills again.

Adam will make a pretend push for peace with Victor, but that plan won’t pan out. Victor will know trouble’s brewing, so he’ll get ready for his son’s next blow. Over with Nick Newman (Joshua Morrow), he’ll support Sharon after another troubling conversation with Adam. Sharon will think it’s best if she leaves town for a bit, and Nick will agree she needs to take time for herself.

Other Young and the Restless spoilers say Kyle Abbott (Michael Mealor) will deliver a serious threat. He’ll make it clear that if Theo Vanderway (Tyler Johnson) causes problems for him, he’s going to regret it. As Kyle’s inner bad boy comes out, Theo will be pleased. He wants to prove the old Kyle isn’t that far gone, so he’ll gloat about the reaction he’s stirring up.

As for Summer Newman (Hunter King), she’ll lash out at Zoe Hardisty (Anna Grace Barlow) for cozying up to Theo. Summer will also bond with Kyle a bit more, so Y&R will keep her busy this week. Chelsea Newman (Melissa Claire Egan) will have a little shindig with Abby before the Grand Phoenix’s official opening. The party will let Chelsea appreciate her new life with Nick and the chance at a brighter future.

However, both Chelsea and Abby will face a major setback soon. During the week of September 9-13, Phyllis will show them that no one messes with her and gets away with it. The Grand Phoenix opening will get underway, but the night won’t end as well as it begins. Theo pointed out that scandals often make the best openings, and that’ll be true for Young and the Restless fans. Things are bound to get entertaining!

While Abby and Chelsea do damage control, Chloe Mitchell (Elizabeth Hendrickson) will have a problem of her own. Billy Abbott (Jason Thompson) needs serious help for his mental issues, and Chloe thinks she can be the one to give it to him. Never mind that she was crazy enough to shoot Adam a few months ago!

We can appreciate Chloe’s turnaround though, and she understands what Billy’s going through. Chloe will have her work cut out for her as she tries to get through to Billy and protect the secret at the same time. Kevin Fisher (Greg Rikaart) will pitch in, but keeping new DA Michael Baldwin (Christian LeBlanc) out of this will be easier said than done.

Elsewhere, Victor will also have a secret he needs to keep under wraps. Will it involve some Adam retaliation plot or perhaps his declining health? Regardless, Victor won’t be interested in spreading the word. He’ll have his reasons and they’ll undoubtedly be good ones.

It sounds like some gripping episodes are coming up. We’ll give you updates as other Y&R news emerges. Stay tuned to the CBS soap and don’t forget to check CDL often for the latest Young and the Restless spoilers, updates and news.