The Young and the Restless Spoilers Next 2 Weeks: Victor Spills Shocker to Victoria – Mia Goes Too Far – Neil’s Heartbreaking Death 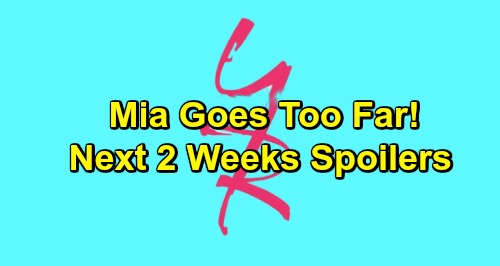 The Young and the Restless (Y&R) spoilers for the next 2 weeks tease that we’ll see some huge successes and some crushing blows. During the week of April 22-26, Abby Newman’s (Melissa Ordway) restaurant opening will be everything she could hope for – with one little exception. Mia Rosales (Noemi Gonzalez) will worm her way in, which will lead to Arturo Rosales’ (Jason Canela) baby confession.

Naturally, Abby will order them both out. She’ll be tired of dealing with Arturo and all his Mia-related drama. Rey Rosales (Jordi Vilasuso) will also give Mia a stern warning in the week ahead. He’ll remind her of what’s at stake when he encourages her to focus on the baby. If Mia doesn’t cooperate, Rey will certainly have her arrested and let the kid be born behind bars.

Other Young and the Restless spoilers say Victor Newman (Eric Braeden) will make an admission. He’ll corner Victoria Newman (Amelia Heinle) to come clean about something, so this undoubtedly relates to her search for answers. Ever since Victoria realized her father was having mysterious meetings in Vegas, she’s been curious. That psychiatrist’s bill from the area only added fuel to the fire.

Victor may not admit everything, but he’ll hope to get Victoria off his back. His top-secret mission is just too important. Over with Devon Hamilton (Bryton James), he’ll be confused when Neil Winters (Kristoff St. John) doesn’t show up for the restaurant launch party. Devon will head home to see what the holdup is, but the reason will leave him absolutely shattered.

The Young and the Restless spoilers state that Neil’s dead body will be found, so Devon will share the news with his loved ones. This sudden loss will leave Devon, Lily Ashby (Christel Khalil), Cane Ashby (Daniel Goddard) and the twins reeling. Mattie Ashby (Lexie Stevenson) and Charlie Ashby (Noah Alexander Gerry) will realize they were the last people to see Neil alive before his medical crisis.

Malcolm Winters (Shemar Moore) and several other special guests will gather to celebrate Neil’s life and offer a tearful goodbye. Y&R fans can expect a huge funeral with plenty of emotional moments, so stay tuned. During the week of April 29-May 3, Victor will hide his trail. Does this mean he’ll cover up things that could be traced in Nevada or are other locations involved?

Regardless, Victor will have his work cut out for him. Nikki asked Rey Rosales (Jordi Vilasuso) to help her out and that’s exactly what he’ll do. Even Nikki herself will stumble across a hint that could help her solve the mystery. The Young and the Restless spoilers reveal that this may tie in with Adam Newman’s (Mark Grossman) upcoming return, so Nikki could be in for a shock eventually.

Over with Mia and Sharon Newman (Sharon Case), they’ll clash once Rey’s not around to stop them. Sharon and Mia clearly hate each other with a passion, but there’s a baby involved here. It’s probably not a good idea for Mia to get so stressed out during all these fights.

Other Young and the Restless spoilers say Cane will open up to Jill Atkinson (Jess Walton). It sounds like Cane may want guidance on how to deal with the Lily situation, especially after Neil’s death. Cane won’t want Lily moving off and tackling her grief alone, but how can he stop her? This may be something Lily just has to deal with on her own, and Cane may have to be OK with that.

The next two weeks will bring some gripping scenes, so don’t miss them. We’ll give you updates as other Y&R details emerge. Stick with the CBS soap and don’t forget to check CDL often for the latest Young and the Restless spoilers, updates, and news.