The Young and the Restless Spoilers: Cheating Kyle Just Won’t Quit – Is Summer Being Patient or Pathetic – Fans Speak Out

BY Heather Hughes on April 20, 2019 | Comments: one comment
Related : Soap Opera, Spoiler, Television, The Young and the Restless 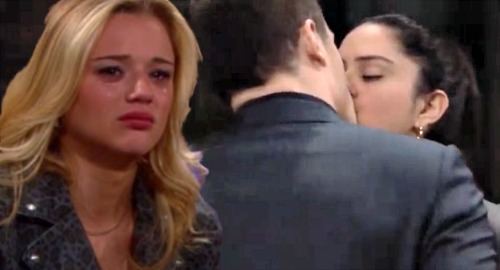 The Young and the Restless (Y&R) spoilers reveal that fans are weighing in on Summer Abbott’s (Hunter King) marriage to Kyle Abbott (Michael Mealor). They certainly have some chemistry, so there are no problems in that department. The trouble is Kyle just can’t seem to settle on one woman – and Summer’s willing to put up with it.

If Kyle wants Lola Rosales (Sasha Calle), he should be with Lola. If he wants Summer, he should stick with Summer. Kyle can’t have it both ways. Juggling boyfriend AND husband duty just isn’t going to work out for any of them in the long run. Kyle’s hurting both women right now, but Summer’s getting the worst of it.

Of course, some Y&R viewers might say Summer deserves it since she trapped Kyle into marrying her. Others may think Kyle’s being cruel instead of ripping off the bandage and telling Summer it’s over. However, Summer could easily walk away if she wanted to. Is Summer being patient or just pathetic? The Young and the Restless watchers have definitely been voicing their opinions on social media.

“At this point I would like to see Summer leave Kyle and hold her head up high,” one fan said. “I like that they have shown Summer maturing and growing but they are taking it to a point where she is a doormat,” said another. “Summer is so delusional,” one more viewer insisted. “Someone please check this poor girl in the loony bin. I am legit concerned.”

Kyle doesn’t want to break Summer’s heart, so he’s trying to drive her away instead. It seems he’s hoping she’ll get fed up enough to leave him or at least get a clue on her own. Nevertheless, Summer’s love for Kyle is awfully strong. It might be misguided or even a little crazy, but it’s real and it’s there.

As a result, Summer may keep coming back for more pain, lies and betrayals. It’s not right for Kyle to let this go on. He needs to decide if he’s going to keep his end of the bargain or bail, and he needs to decide now! The Young and the Restless spoilers say things may get worse with  more Kola cheating before they get better, so stay tuned.

What do you think about Summer’s side of all this? Is she being patient or just pathetic? We’ll give you updates as other Y&R news emerges. Stick with the CBS soap and don’t forget to check CDL often for the latest Young and the Restless spoilers, updates and news.