BY Sean O'Brien on April 20, 2019 | Comments: one comment
Related : Soap Opera, Spoiler, Television, The Young and the Restless 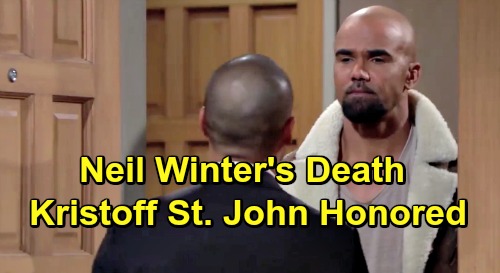 The Young and the Restless spoilers tease that the death of Neil Winters (Kristoff St. John) will naturally impact Genoa City. The loss of Lily Ashby (Christel Khalil), Devon Hamilton (Bryton James), and Moses Winters’ (as most recently played by Dax Randall) father will dramatically affect his children, along with many other connected characters.

Everyone at Y&R, along with all of the show’s fans are grieving the loss of St. John. The beloved soap opera icon unexpectedly passed away early this year due to hypertrophic heart disease.

The 52-year-old actor achieved fame in the early 1990’s, after debuting as Neil in 1991. His pairing with Victoria Rowell (Drucilla Barber-Winters) created one of daytime’s most charismatic couples. Rowell, along with many former and current cast mates, will appear in a behind the scenes tribute episode that will air on April 29.

Y&R will lead-in to that show the week prior through a series of episodes that deals with the death of Winters’ character.

Lily’s early release from prison appears to have been timed so that she’ll be present to react to her father’s passing. She and Cane Ashby (Daniel Goddard) are current dealing with the real possibility of divorce.

Cane isn’t willing to give in, but, surprisingly, Mattie Ashby (Lexie Stevenson) has been telling her dad that Lily may not love him anymore. Charlie Ashby (Noah Alexander Gerry), Neil’s other grandchild, also senses trouble. The powerful emotions that will be elicited during the coming crisis will likely serve to either reunite, or end Lane.

At least Devon has Ana Hamilton (Loren Lott) and the father’s side of her family for support, as he’ll need it. It stands to reason that Devon and Elena Dawson (Brytni Dawson) will bond in the weeks ahead.

Moses has been off-screen for a number of years. The return of Julia Pace Mitchell (Sofia Dupre), who is Moses’ mother, could mean that Neil’s youngest child, potentially SORAS’d, will be in GC during this time. Possibly, one, or both characters could return in future as a way of keeping this part of Neil’s family in the script as well.

The return of Shemar Moore (Malcolm Winters) is welcomed, as his character was electric when Neil’s brother initially debuted in 1994. Malcolm is Lily’s biological father, a reveal which was an epic Y&R arc many years ago.

Considering Moore’s nighttime television status, it’s unlikely that Malcolm will be seen past the special episodes. But hopefully this character returns again as well, as Moore is a solid actor.

Along with the above, Jack Abbott (Peter Bergman) was like a brother to Neil. Importantly, they were each other’s sponsors.

Neil is watching over all of his loved ones and friends and surely will expect Jack to continue moving in the right direction. That would include ending his feud with Ashley Abbott (Eileen Davidson), who became close with Neil just prior to the end of his life. So possibly the Abbott siblings will patch up their differences in honor of this great Y&R character who is no longer with them on earth, but will forever be in the hearts of all who knew him.