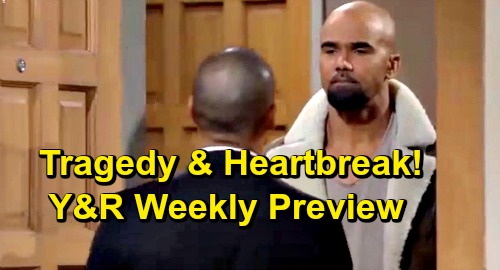 The Young and the Restless (Y&R) spoilers for the week of April 22-26 tease that Ashley Abbott (Eileen Davidson) will be back in town. She’ll return for Abby Newman’s (Melissa Ordway) big night as the guests finally flood in Society. Abby seems worried no one will show in Friday’s episode, but things will definitely pick up once Monday rolls around.

Ashley will be greeted by Jack Abbott (Peter Bergman) at the restaurant opening. She’ll insist she’s there to support her daughter, but Jack will note she’s there to support her company, too. Y&R fans can expect Jack to uncover more shadiness at Jabot. Will Ashley be up to her old tricks again? If so, she’d better watch her back! Jack will keep an eye on Ash as he plays to win and hopes for the best.

Other Young and the Restless spoilers say Devon Hamilton (Bryton James) will be puzzled. Neil Winters (Kristoff St. John) won’t be at opening night like he promised, so Devon will ask Lily Winters (Christel Khalil) if she’s heard from him. Lily will suggest that the last time she got updates, Neil was recharging his battery back at the penthouse and preparing to hit the dance floor.

Unfortunately, Devon and Lily will have no idea that tragedy has struck. The Young and the Restless spoilers say they’ll eventually get some terrible news. Y&R wanted to honor both Kristoff St. John and his character after his unexpected death, so this is Neil’s exit story. His death will rock Devon, Lily, Mattie Ashby (Lexie Stevenson), Charlie Ashby (Noah Alexander Gerry) and so many more.

Genoa City will mourn this difficult loss over the next few episodes, so Y&R viewers may want to keep their tissues handy. The Young and the Restless spoilers say we’ll see a tender moment when Malcolm Winters (Shemar Moore) shows up at Devon’s door. They won’t even need words as they embrace and just take in each other’s support.

Later, Malcom will catch up with Lily and Devon. They’ll talk about old memories of Neil and how they intend to keep his memory alive. It won’t be easy to cope with Neil’s demise, but they can lean on one another to get through this. Still, you can bet Neil’s funeral will be a real tear-jerker.

Y&R viewers won’t want to miss the gripping scenes ahead. We’ll keep you posted as other details emerge. Stay tuned to the CBS soap and don’t forget to check CDL often for the latest Young and the Restless spoilers, updates and news.