The Young and the Restless Spoilers: Nick and Chance Battle for Phyllis – New Rivalry Heats Up Once Chelsea’s Back with Adam?

BY Heather Hughes on November 22, 2019 | Comments: one comment
Related : Soap Opera, Spoiler, Television, The Young and the Restless 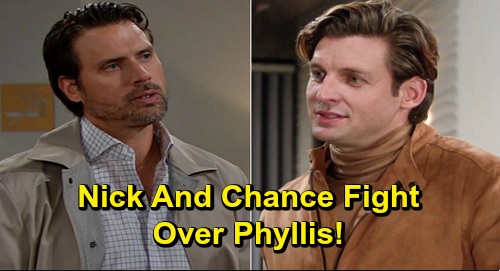 The Young and the Restless (Y&R) spoilers tease that a new rivalry could be brewing. Y&R fans know Nick Newman’s (Joshua Morrow) been battling it out with Adam Newman (Mark Grossman) ever since Adam returned to town. It’s safe to say that rivalry is getting pretty stale at this point. Adam’s settled down and is focusing on being a good father, so it’s not even a true rivalry anymore. Most of the time, it’s just Nick being a jerk.

Nick certainly has a right to be wary of Adam after everything that’s gone down. That’s especially true since Adam and Chelsea Lawson (Melissa Claire Egan) seem poised to reunite. Perhaps there’s part of Nick that can sense it’s coming. However, some might say it’s karma since Nick pretty much stole Adam’s family right in front of him.

Adam was eager to pick up where he left off with Chelsea when he first returned. She wasn’t having it, and Nick was all too eager to swoop in. Calvin Boudreau (John Burke) was barely cold when Nick started making his move! Even recently, Nick pushed Chelsea to bring Connor back to his place. He’s already got the love of Adam’s life and one of Adam’s sons. Isn’t that enough?

You could argue it’ll serve Nick right when Chelsea and Adam inevitably get back together. Nick will be growing closer to Phyllis Summers (Michelle Stafford) again, so it’s not like he’ll be without a love interest. Of course, there could be a few obstacles to a “Phick” reunion. Will one of them be Phillip “Chance” Chancellor IV (Donny Boaz)? That brings us to that potential new rivalry we mentioned.

Based on Boaz’s height and overall look, he seems handpicked to be paired with Stafford. They probably would’ve gone a bit younger-looking with this recast if they were truly invested in a Chance and Abby Newman (Melissa Ordway) pairing. That shouldn’t come as a surprise really. When is Y&R ever invested in a long-term relationship for Abby?

Abby and Chance will probably end up being a repeat of Abby and Nate Hastings (Sean Dominic): flirty and fun – but going absolutely nowhere at all. The Young and the Restless hasn’t devoted time to building a lengthy, stable romance for Abby before, so there’s no reason for them to start now.

Instead, a love triangle may be looming with Phyllis at the center. Once this fling with Abby fizzles, Chance may drift toward Phyllis and spark some jealousy from Nick. Will they vie for Phyllis’ heart? It makes sense considering Chance is buddies with Adam and they’re keeping some big secret. Nick’s likely going to be concerned about their connection and whatever they’re hiding.

The secret could sour Abby’s view of Chance, but Phyllis won’t be fazed. That’ll leave the door open for Phyllis to remain intrigued by Chance while reconnecting with Nick. It’s the perfect recipe for Nick and Chance to be foes competing for Phyllis – even if they’re not aware that’s what they’re doing at first.