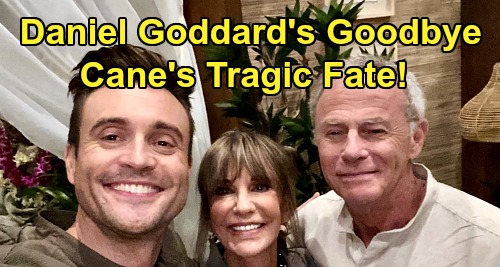 The Young and the Restless (Y&R) spoilers reveal that one CBS soap star is preparing for his upcoming exit. Daniel Goddard is set to leave the role of Cane Ashby – and soon! On Instagram, Goddard revealed that he’s only got two more episodes left to air. He posted a fun pic with Jess Walton (Jill Abbott) and Tristan Rogers (Colin Atkinson) as he gears up for this tough goodbye.

Goddard reflected on the great storylines he’s been part of and expressed his appreciation for his time on Y&R. This is clearly a difficult farewell, but he’s grateful to fans for all their love and support. Let’s look at what Goddard had to say before his upcoming departure.

“Today is my 2nd to last episode on #yr & what a ride it has been! Jess & Tristan I couldn’t appreciate you anymore, it has been such a joy & pleasure… we told some pretty awesome stories together… didn’t we! And to all the fans that have been on this wonderful journey with us over the years… thank you, you are loved! #faith”

It seems Goddard didn’t take the recent preemptions into account, but it does let us know he’s only got two episodes left to play out. With that in mind, we can look at some Young and the Restless spoilers and speculate on what’s to come. On Monday, Cane will find himself cornered and accused. The walls will close in, which will set up his final episode later. That’s when Cane will face the music.

The Young and the Restless spoilers say Cane will have to own up to what he’s done. Colin will insist Cane was involved in the con on Devon Hamilton (Bryton James), and it sounds like Cane will eventually confess. Devon will hit the roof, but Cane’s fate will also lie in Devon’s hands. If Cane’s admitting his wrongdoing and facing the consequences, it appears there are only two options for his exit.

Devon warned that if Colin indeed ran a con, he wanted him locked up. Will he feel the same way when it comes to Cane? It’s possible Devon will go a little easier on Cane if it wasn’t his idea. Plus, we have to remember how hard it was on the twins when Lily Winters (Christel Khalil) went to prison. Devon may take pity on Cane for Charlie Ashby (Noah Alexander Gerry) and Mattie Ashby’s (Lexi Stevenson) sake.

There’s also the matter of little Sam Ashby, who’s barely mentioned but does exist. Devon may decide to let Cane off the hook so he can be there for his young son. Poor Sam deserves a better father, but Devon may suggest this is Cane’s chance to be one. He might insist that Cane should give back his billions and scram. Devon may be willing to let Cane disappear in shame as long as he never shows his face in Genoa City again.

Of course, it’s also possible Devon will be so enraged that he can’t think about anything but justice. We can’t rule out a prison exit for Cane under the circumstances, but they may work the usual “nice guy” angle for Devon and let him be the bigger man.

Today is my 2nd to last episode on #yr & what a ride it has been! Jess & Tristan I couldn’t appreciate you anymore, it has been such a joy & pleasure… we told some pretty awesome stories together… didn’t we! 😊 And to all the fans that have been on this wonderful journey with us over the years… thank you, you are loved! ❤️ #faith