The Young and the Restless Spoilers: Nick and Chelsea Celebrate Christian Custody Win By Making Love – Watch Out For Adam

BY Olivia Marie on August 24, 2019 | Comments: one comment
Related : Soap Opera, Spoiler, Television, The Young and the Restless 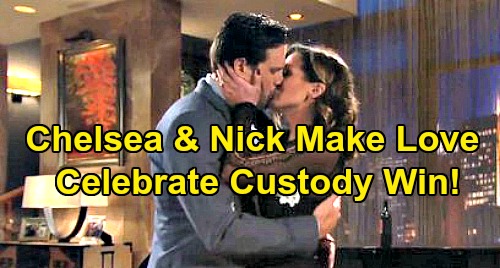 The Young and the Restless (Y&R) spoilers tease that Nick Newman (Joshua Morrow) will win custody of Christian Newman after battling to keep his little boy for several months. The court decided that he is a more suitable parent than Adam and Christian is safer in his care.

For Nick, this decision seems final and it makes him feel very happy. Chelsea Newman (Melissa Claire Egan) and Nick celebrate Christian returning home by hitting the sheets and taking their relationship to the next level. Here’s what you need to know about what’s coming up on Y&R.

On Christian’s first night home, Chelsea and Nick tell Christian that Connor is back. The boys’ bond as the parents hope that they will still be close. They hope they can pick up where they left off and raise the boys as a family.

Chelsea’s biggest concern is she worries how Adam Newman (Mark Grossman) will react to the news that she and Nick are a family with his two sons. Nick thinks that she needs to let the chips fall where they may and reminds her that the judge ruled he was the better parent for Christian.

After the boys go to sleep, Nick and Chelsea relax while sharing wine. Y&R spoilers say that Nick is happy she’s in his life again and he adores Connor. Nick isn’t sure if Chelsea wants to be friends or if she is interested in reuniting as a couple.

As a big surprise, Chelsea kisses Nick. He wasn’t sure what to expect because there were unresolved feelings between them. He was angry about how things ended before, but he loved her deeply and their relationship was great.

Nick was stunned by her kiss but kissed her back. It led to them making love. It is a beautiful moment between them as Nick has not pushed her into it at all. He’s respected her boundaries and let her grieve her husband’s death.