BY Kinsley Goldman on June 10, 2019 | Comments: one comment
Related : Soap Opera, Spoiler, Television, The Young and the Restless 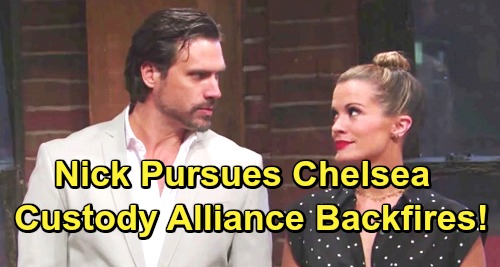 The Young and the Restless (Y&R) spoilers tease that Nick Newman (Joshua Morrow) could get desperate. Despite his best efforts to drive Adam Newman (Mark Grossman) away, his brother will play just as dirty to get his hands on Christian Newman (Jude and Ozzy McGuigen). Keeping custody of Christian is obviously what matters most to Nick, but that doesn’t mean he wants his life destroyed in other ways.

The young and the Restless spoilers know that Adam scored some Dark Horse secrets with Phyllis Summers’ (Gina Tognoni) help. He found out the company’s got massive debt and used that to gain the upper hand. Adam wants to raise Christian himself, so he’ll do everything in his power to make that dream a reality.

Nick would certainly give up Dark Horse for his son’s sake, but he won’t see why he should have to. He’ll think Adam’s behavior is outrageous, so he’ll need a way to fight back. The Young and the Restless spoilers state that Nick will rely on a secret weapon. He’ll turn to a surprising ally in his fight to make Adam back off.

On new Y&R episodes during the week of June 17-21, Nick will contact Chelsea Newman (Melissa Claire Egan) – or whatever name she happens to be going by these days. Chelsea took on another identity and found herself a new husband, who adopted Connor Newman (Gunner and Ryder Gadbois).

At least that’s what Chelsea claims. We really only have the word of a scared con artist, so maybe we should be skeptical.

Regardless, Y&R spoilers say Nick will need Chelsea’s assistance. Will he think Chelsea’s the only one who can talk some sense into Adam?

Will Nick beg Chelsea to let Adam see Connor and hopefully dissuade his pursuit of Christian? Nick may even hope Chelsea can convince Adam to let the Dark Horse drama go and just leave town.

Of course, Nick’s plan could backfire big time. How’s Adam going to feel if his brother, who got together with Chelsea not too long after his death, suddenly teams up with her? Enraged sounds about right! Adam may not be willing to listen to Chelsea if he feels like Nick’s telling her what to say.