BY Heather Hughes on June 10, 2019 | Comments: one comment
Related : Soap Opera, Spoiler, Television, The Young and the Restless 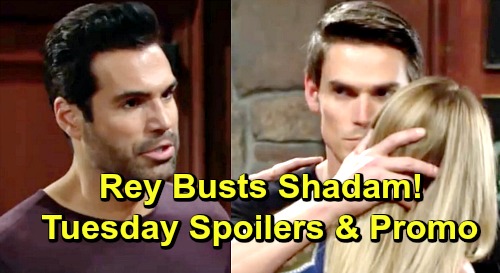 The Young and the Restless (Y&R) spoilers for Tuesday, June 11, tease that Adam Newman (Mark Grossman) will come clean to Sharon Newman (Sharon Case). There’s something that’s been on his mind, so he’ll want to clear the air. Adam will acknowledge that there are still some unresolved feelings between them. He’ll have a hunch that Sharon’s been fighting the same feelings.

Based on Sharon’s behavior and reaction to Adam’s return from day one, that’s fair of Adam to say. Y&R fans know Adam dreamed of Sharon not too long ago. He told her he loved Chelsea Newman (Melissa Claire Egan) in that dream, but Sharon felt like maybe he loved them both.

That may be along the lines of what Adam conveys on Tuesday. He might admit that part of him will always love Sharon, even if he still wants his family back. Likewise, Sharon has described her relationship with Adam as very intense. There’s no way to stop things from flooding back, although Sharon still loves and wants to be with Rey Rosales (Jordi Vilasuso) – at least for right now.

Unfortunately, The Young and the Restless spoilers state that Rey will catch the former flames in a warm embrace. He’s already been wary of Adam, so this will really send him over the edge. Sharon’s attachment to Adam will leave Rey both concerned and incredibly jealous. He’ll feel like Sharon’s lying about how she truly feels, so he’ll stomp off and leave Sharon to fret.

As for Adam, perhaps part of his confession will be about exploiting his bond with Sharon and keeping her on his side. Over with Nick Newman (Joshua Morrow), he’ll set up a meeting with Jack Abbott (Peter Bergman). He needs an investor to help him save Dark Horse, so he’ll hope Jack’s willing to pitch in.

Alas, that won’t be possible due to Jabot’s own financial woes. Jack will wish him luck since Nick’s worked to hard to build this company, but Nick will need to find an alternative.

That means taking a trip to see Victor Newman (Eric Braeden). It’ll be a last resort since Nick hates going to his dad for help. The whole point of Dark Horse was doing his own thing and fighting his own battles, so Vic will find it amusing that Nick’s begging for his assistance now.

Nevertheless, Victor will be sympathetic to Nick’s dilemma. He’ll hope Nick and Adam can find some common ground, but Nick will insist that’s impossible. The Young and the Restless spoilers say Nick will want Victor to stand with him against Adam, but that’s probably wishful thinking.

Victor may scold Adam for his behavior, but completely rejecting him isn’t going to happen – not when Victor’s dying and desperate to make amends. We’ll give you updates as other Y&R news comes in. Stay tuned to the CBS soap and don’t forget to check CDL often for the latest Young and the Restless spoilers, updates and news.