BY Olivia Marie on May 8, 2019 | Comments: one comment
Related : Comings & Goings, Soap Opera, Spoiler, Television, The Young and the Restless 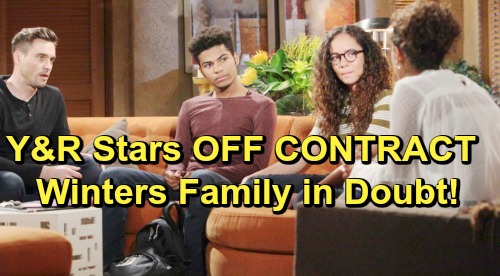 The Young and the Restless (Y&R) spoilers tease that more changes are ahead for the Winters-Ashby family in the coming weeks. After Neil Winters’ (Kristoff St. John) death, many Y&R fans worried about what that meant for the family. And, head writer Josh Griffith promised the viewers that the Winter family is not going to disappear and they will become a core family again. However, with Christel Khalil (Lily Ashby) on recurring status, many fans doubted how that would play out.

The newest blow to the Winter-Ashby fans was the scoop that Charlie Ashby (Noah Alexander Gerry) and Maddie Ashby (Lexi Stevenson) were dropped to recurring status. That was a clear sign that the teens would rarely be shown and only appear during family get-togethers or times of crisis.

Even though the Y&R fans have asked the network to recast the role of Lily instead of working with Khalil’s schedule, they have refused. CBS worries that the viewers may not accept a new actress in the role that Christel has played since 2002. While it might be tough, a recast could give Lily’s character a much-needed reset.

As for the teens, it’s possible that Griffith is planning on sending them off to college for a while. That way when they return, he can immerse them into a career and make them the focus of the Winters family in the years to come.

For now, the fans are struggling with the diminishing Winters family. Kristoff’s real-life death was a shocker to the fans and it has taken them several months to get past it.

As for what Josh has in store for the Winters family, time will tell. For now, Cane Ashby (Daniel Goddard) is getting screen time as Traci Abbott’s (Traci Maitland) muse for her new novel. And, Devon Hamilton (Bryton James) is struggling to move on from Hilary Hamiton (Mishael Morgan) and Neil’s deaths.

It sure doesn’t look like Griffith has plans to preserve the Winters core family. Are you shocked that Lily’s twins were dropped to recurring status on Y&R?