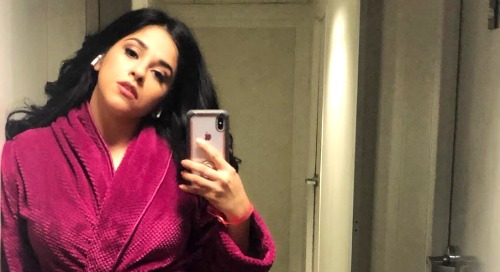 The Young and the Restless (Y&R) spoilers reveal that Noemi Gonzalez (Mia Rosales) just wrapped filming on the CBS soap. On a recent Instagram story, Gonzalez posted a message about her last day on set. Monday, April 15, undoubtedly brought some bittersweet moments. Gonzalez had to say goodbye to her Y&R family, but she’s also eager to start an exciting new chapter.

In this Instagram story, Gonzalez made several hopeful comments. She wrote “When one door closes…” as part of the clips and thanked her friend, Marisa, for putting together a little going away present. Gonzalez showed off the crepe paper decorations along with a card, flowers and glitter on her dressing room table. It was a sweet sendoff as Gonzalez gets ready for whatever comes her way next.

Gonzalez is obviously in good spirits about finishing off her time at The Young and the Restless. She said, “Last day vibes! It’s a celebration y’all!” Mia is one of those pot-stirring characters we’re supposed to hate, so Gonzalez did her job well. The writing wasn’t set up for Mia have longevity at Y&R, but she’s been providing plenty of drama.

The Young and the Restless spoilers say that trend will continue over the next few weeks. Since we know Gonzalez just filmed her final episode, that means we can expect her last airdate to be around a month or so from now. How will Mia shake things up before she goes? It seems likely her unborn child will play a role in her upcoming exit.

It’s possible Mia will lose the baby – and all her leverage. Perhaps there’ll be some accident that sets up this Rosales tragedy. This baby really complicates the lives of Rey Rosales (Jordi Vilasuso) and Arturo Rosales (Jason Canela), but they’d never wish death on him or her. Mia might have a miscarriage and end up in prison for her exit. Then again, Rey might take pity on her and help her get out of town.

Of course, it’s possible the truth about Lola Rosales’ (Sasha Calle) attack will come out and Mia will end up in pregnant in prison. It’s not what Rey wants, but it may be unavoidable. That could leave the door open for some baby mayhem down the road.

Thank you to everyone for all your love and support 🙌🏽🙏🏽❤️ Im so thankful for you!! ❤️ feeling grateful, honored, and humbled by all your sweet comments 🙈❤️😘😘!! . . . . . #actress #actor #tv #film #miarosales #yr #newchapter #grateful #fans #followers #love #work #set #hollywood #acting #journey