The Young and the Restless Spoilers: Paul Makes a Huge Mistake – Apologizes and Rehires Rey 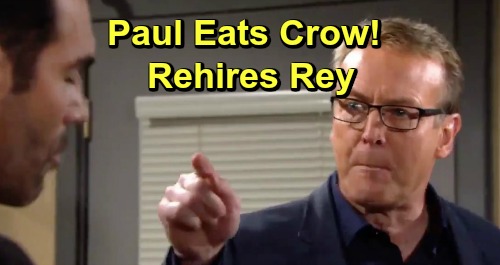 The Young and the Restless (Y&R) spoilers tease that Paul Williams (Doug Davidson) is going to feel guilty over Rey Rosales (Jordi Vilasuso) dismissal. He will wonder if he may have jumped the gun and judged the detective harshly. This all comes to be after Paul has a chit chat with his good pal and ex-wife, Nikki Newman (Melody Thomas Scott).

Paul will visit Nikki to catch up with her. He will note that she, Sharon Newman (Sharon Case), and Victoria Newman (Amelia Heinle) have been through a lot in the last few weeks. Y&R spoilers state that Nikki will point out that without Rey’s involvement they would be in jail and J.T. Hellstrom (Thad Luckinbill) would still be free.

Of course, Paul will have to admit that Rey put his neck and career on the line for the women. He knew that it could and probably would cost him his job, but he felt it was the right thing to do. He lured J.T. to the cabin and helped break the women out of the prison van. And, Rey was the first one to admit that if he had to do it all over again, he would make the same decision.

Paul will have to face the facts – Rey was wrong, yes, but he did it for the right reasons. He needed to bring J.T. out and that’s the only way he knew to prove that he was alive and free Nikki, Victoria, and Sharon.

The Young and the Restless spoilers state that after his chat with Nikki, Paul will call Rey, requesting he come see him. Rey cannot help but feel a little scared to meet with his former boss, scared that he may want to press legal charges against him for breaking the women out of jail.

Y&R spoilers say that Rey will be stunned when Paul not only apologizes for his reaction to how he “helped” the women, but he will offer him his job back. Of course, Rey will accept his offer, grabbing his gun and badge before leaving his boss’ office.

Paul will let Rey know that when he makes a judgment error he says so. He will acknowledge that Rey is a great cop and he made a great decision hiring him last year.

Are you surprised that Paul changed his mind? Does Rey deserve to be a member of the GCPD? Don’t forget to come back to CDL later for more The Young and the Restless (Y&R) spoilers, news, and casting updates!