BY hellodrdavis on February 12, 2019 | Comments: one comment
Related : Soap Opera, Spoiler, Television, The Young and the Restless 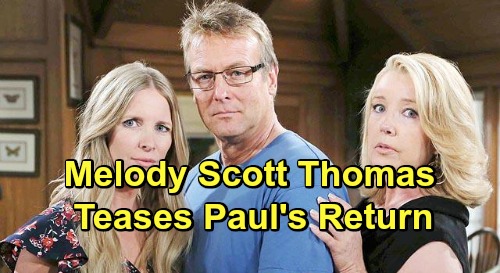 The Young and the Restless spoilers tease that Rey Rosales (Jordi Vilasuso) has his hands full with the imploding JT Hellstrom (Thad Luckinbill) murder investigation. With Nikki Newman’s (Melody Thomas Scott) new confession, everything’s gone haywire, and there’s Rey handling it all alone. He could really use some help.

Of course, TPTB could always bring back Paul Williams (Doug Davidson) to help Rey with the investigation. Fans haven’t seen Paul since last year, when Doug Davidson was let go from the CBS soap. It would be great to see Paul come back and jump right in to the murder investigation to shake things up. Perhaps he could move things along a little faster than Rey.

Fans have been clamoring for Doug Davidson’s return for months. On Twitter, Doug gets numerous fan tweets each day expressing hope that his character will someday return to Y&R. And many fans are vocal on social media and various outlets about their dislike of all the screen time given to new characters, as opposed to show vets.

And now that there has been a regime change at Y&R, with a new executive producer and head writer on board, there seems to be renewed hope that Paul will once again grace our screens in the future.

It looks like there’s some renewed hope amongst Y&R’s cast for Doug Davidson’s return as well. Recently, Melody Thomas Scott, who portrays Nikki Newman, tweeted about Doug in response to a fan who posted a photograph of Melody and Doug on set.

Melody tweeted: “I’ll never stop dreaming…Let’s make this happen! Love you and miss you, my first and forever-classic Genoa City partner in crime! Love you, my Dougie! xo.”

Many fans would like to believe that Melody’s tweet signals that something’s in the works behind the scenes to bring Doug back to Y&R. And Melody is not the first Y&R vet to express a desire for Doug to return. Eric Braeden, who portrays Victor Newman, has been very vocal about the need for Doug’s return and the importance of treating long-time soap vets with due respect.

But as of yet, there is no information suggesting that Doug Davidson is slated for a return to Y&R, nor that there will be any revamping of storylines in the direction that many fans want. But that won’t stop fans – or other soap stars – from continuing to call for his return.

Would you like to see Doug Davidson return to Y&R? Stay tuned to the CBS soap and don’t forget to check CDL often for the latest Young and the Restless spoilers, updates, and news.

.I’ll never stop dreaming… Let’s make this happen! Love you and miss you, my first and forever-classic Genoa City partner in crime! Love you, my Dougie! xo https://t.co/PSvmVnHmNh