The Young and the Restless Spoilers: 2 Weeks Ahead – Lola Lands in Grave Danger, Kyle Saves Her Life 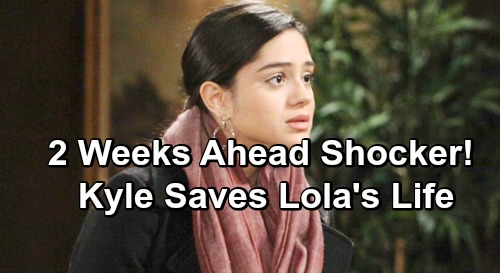 The Young and the Restless (Y&R) spoilers tease that Lola Rosales (Sasha Calle) will get the wrong idea. After Summer Newman (Hunter King) pulls out all the stops at the cabin, Kyle Abbott (Michael Mealor) will push his ex away. He’ll contend that he was clear about maintaining boundaries. Kyle will insist he’s looking for friendship from Summer and that’s it. His wounds are still too fresh from his breakup with Lola.

Unfortunately, Lola will have already spotted the duo’s close moment. She’ll storm in and confront Kyle about his little sofa encounter with Summer. Lola will note that she was going to suggest their split was a mistake. Kyle will quickly get behind that idea, but Lola will insist it’s too late. She’ll indicate that Kyle and Summer were “all over each other,” so getting back together will be off the table.

Lola will snap that she was right all along. She’ll think Kyle’s just interested in sex, so she’ll encourage him to be with Summer, who gives it freely. Kyle will try to protest, but Lola will load back up in Arturo Rosales’ (Jason Canela) truck and take off. However, Y&R spoilers hint that she’ll speed straight into danger!

After this Valentine’s Day debacle, Kyle will undoubtedly hope there’s still a chance for a future with Lola. He may decide to follow her and attempt to calm her down. During the week of February 18-22, Kyle will make a startling discovery. The Young and the Restless spoilers say Kyle will stumble across Lola in a dire situation. It sounds like Lola’s life could be at stake soon enough.

Perhaps Lola will skid off the road and crash Arturo’s truck. If not, there’s surely some other perilous nightmare for Lola to face. Kyle can step up as Lola’s hero, which could earn him some serious points. Saving Lola’s life would go a long way toward making up for the Summer blunder.

We should mention that Michael Mealor and Camryn Grimes (Mariah Copeland) were spotted on the hospital set a while back. An Instagram story featured them there on January 29, so those scenes should air around or just after the end of February. If Lola is severely injured, she could still be in the hospital by then. It’d make sense for Mariah and Kyle to be visiting her.

On the other hand, someone else might already be in medical crisis mode at that point. The Young and the Restless spoilers say bombs will keep dropping in Genoa City, so there’s plenty more drama in store. We’ll give you updates as other Y&R news comes in. Stay tuned to the CBS soap and don’t forget to check CDL often for the latest Young and the Restless spoilers, updates, and news.