BY Heather Hughes on February 12, 2019 | Comments: one comment
Related : Soap Opera, Spoiler, Television, The Young and the Restless 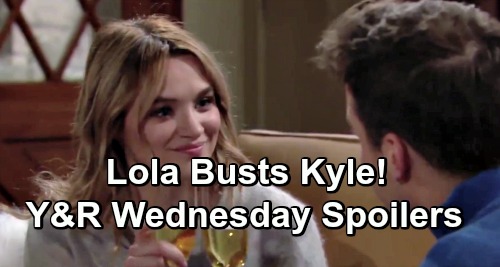 The Young and the Restless (Y&R) spoilers for Wednesday, February 13, tease that Cane Ashby (Daniel Goddard) will find himself in an uncomfortable situation. Mattie Ashby (Lexie Stevenson) and Charlie Ashby (Noah Alexander Gerry) will realize Cane doesn’t intend to visit their mom for Valentine’s Day. The twins will learn Lily Ashby (Christel Khalil) will be left lonely behind bars!

Naturally, that’ll raise major red flags. Charlie and Mattie will ask plenty of questions, but Cane will do his best to sidestep them. He’ll probably provide a vague answer for why he won’t be with Lily on this romantic holiday. Cane will hope he can convince the twins to let it go, but they’ll have other plans.

The Young and the Restless spoilers say Lily has a special gift headed her way. Mattie and Charlie will do a sweet video tribute to their parents’ marriage. Perhaps they’ll feel like it’ll help to remind Lily and Cane of their love story.

After the teens show off their hard work, Cane will end up adding a personal message. He’ll undoubtedly express his deep love for Lily and trust that they can get through this eventually. Cane’s made major mistakes, but he still believes they belong together. Maybe there’s still a chance for Cane and Lily once her prison sentence comes to an end.

At home on Wednesday’s new Y&R episode, February 13, Sharon Newman (Sharon Case) will face a shocker. She’ll be taken aback when Rey Rosales (Jordi Vilasuso) shows up on her doorstep and announces that his marriage is over. Rey will insist that Sharon is the one he really wants. He’ll declare his love and hope Sharon shares his feelings.

Mia Rosales (Noemi Gonzalez) calls out Arturo Rosales’ (Jason Canela) name during sex on Tuesday, so that’s what’ll prompt this bold move in Wednesday’s Y&R episode. However, it’s clear that Rey will mean it. Rey and Sharon have been fighting this for quite some time, so Mia’s blunder just provided a good excuse to leave her.

After Sharon returns Rey’s “I love you,” things will take another stunning turn. Rey will spot an old phone bill at some point. Thanks to a 911 call the night J.T. Hellstrom (Thad Luckinbill) disappeared, Rey will realize Sharon has to be hiding something. He’ll push for all the facts later this week, so the cover-up crew’s pact is about to crumble.

In the meantime, Summer Newman (Hunter King) will push Kyle Abbott (Michael Mealor) to accept her love. She’ll cozy up to Kyle at the cabin and try to make him believe she’s the one he needs. After Summer leans in for a kiss, Lola Rosales (Sasha Calle) will arrive and watch the exes. She’ll fume as she prepares to confront them, so some heated moments are coming up once Valentine’s Day arrives.