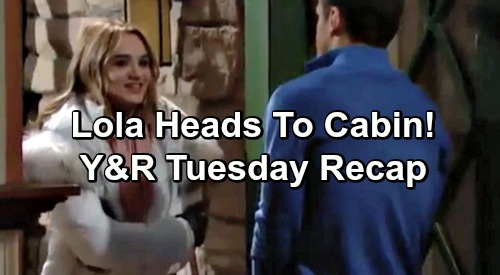 The Young and the Restless (Y&R) spoilers update and recap for Tuesday, February 12, tease that Rey Rosales (Jordi Vilasuso) will give Sharon Newman (Sharon Case) a warning. He’ll point out that Nikki Newman (Melody Thomas Scott) confessed to killing J.T. Hellstrom (Thad Luckinbill) after the girls’ night party. Rey will insist that Sharon has to tell him everything. This could be her last chance to secure any protection.

Of course, Sharon won’t admit anything. She’ll maintain that she’s already revealed what she knows, so Rey will be left to wonder what else she’s hiding. Over with Phyllis Summers (Gina Tognoni), she’ll worry about how much Nikki might’ve divulged. Phyllis will want to speak with the other cover-up crew members, so Nick Newman (Joshua Morrow) will suggest she should do what she has to do.

At Victoria Newman’s (Amelia Heinle) place, she’ll lean on Billy Abbott (Jason Thompson) for support. Victoria will fret about the situation with Nikki, but Billy will feel like J.T. is the only one at fault. He’ll be certain that the truth will come out, but that won’t exactly be comforting to Victoria. This J.T. mess has become a real nightmare for all the women involved.

Other Young and the Restless spoilers say Rey will bring home some small gifts for Mia Rosales (Noemi Gonzalez). He’ll bring a bottle of wine along with some magazines, including the one announcing Abby Newman’s (Melissa Ordway) engagement to Arturo Rosales (Jason Canela).

Mia will get hung up on the news, but she’ll try to pretend she’s OK with it. The name she’s about to call out during sex will tell a different story! After Mia utters “Arturo” during their steamy session, Rey will blow his top. He’ll insist that Mia wants Arturo, so she’s got him. Y&R spoilers say Rey will storm out of the apartment, so Mia will know she screwed up big time.

Over with Mariah Copeland (Camryn Grimes), she’ll find Lola Rosales (Sasha Calle) and pass along some Valentine’s Day cookies she made with Tessa Porter (Cait Fairbanks). Mariah will hint that Kyle Abbott (Michael Mealor) must have something huge planned for the romantic holiday, but Lola will admit they split.

Naturally, Mariah will weigh in and try to help them patch things up. She won’t understand why Lola’s complaining about Kyle’s grand gestures. It’s the only way he can get Lola’s attention these days. Mariah will argue that success only matters if you have someone to share it with, so she’ll push Lola to step up and show Kyle she cares.

After Kyle heads to the cabin alone, Lola will drop by the Abbott mansion. Jack Abbott (Peter Bergman) will fill Lola in on where she can find Kyle. Meanwhile, Summer Newman (Hunter King) will ponder the invitation Kyle made for Lola. She’ll realize where Kyle can be found, too. Soon after, Summer will surprise Kyle when she shows up to join him on his cabin getaway.

Back with Phyllis, she’ll make her position clear. During a conversation with Sharon, Victoria and Mariah, tension will erupt. Phyllis will insist that Nikki had better stick to the story she gave and leave the rest of them out of it. She’ll warn that she’s certainly not going down for J.T.’s murder.

Phyllis will return home to Nick, who’ll mainly be concerned about Nikki. Nevertheless, Phyllis will note that the rest of them could face charges as well. Nick will try to offer reassurance and strength, but it’s safe to say Phyllis can’t be sure of anything at this point.