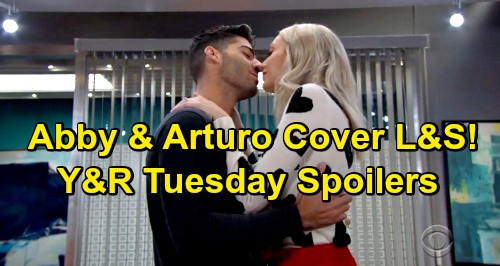 The Young and the Restless (Y&R) spoilers for Tuesday, February 12, tease that Abby Newman (Melissa Ordway) will be thrilled with the results of her big idea. She recently decided to get some engagement pictures made with Arturo Rosales (Jason Canela). Abby managed to score a fancy-schmancy photographer, so she’ll expect good things when the wedding media blitz begins.

Luckily, Abby won’t be disappointed. The Young and the Restless spoilers say Abby and Arturo will be featured on the front of Life & Style – but only in soap land, of course! Y&R fans will see a mock cover of this real-life magazine, so that should be fun.

Abby will just hope it distracts the public from her disaster of a family. As if Victor Newman’s (Eric Braeden) legal drama wasn’t causing enough problems, Nikki Newman’s (Melody Thomas Scott) confession will rev up interest once again. Nevertheless, Abby will try to work the Newman heiress angle and get everyone talking about her nuptials instead of a dead body.

Other Young and the Restless spoilers say Jack Abbott (Peter Bergman) will rush to his son’s defense. Kyle Abbott (Michael Mealor) takes Jack’s advice on Monday and plans a sex-free, romantic getaway for Lola Rosales (Sasha Calle). Once Jack learns the move didn’t work out, he’ll back Kyle up on Tuesday.

Abby has been spending more time with Lola lately thanks to all the restaurant prep. They’re becoming friends, so she may take Lola’s side in all this. That could put prompt Jack’s defense of Kyle. He may not see what’s so bad about wanting to spend time with the person you love on Valentine’s Day.

No one’s entirely blameless since Kyle really is letting Summer Newman (Hunter King) get too close. However, Lola’s constant berating isn’t fair either. Every time Kyle tries to be a doting boyfriend, Lola finds a way to twist it. Kyle can never do anything right, so this isn’t just about the sex he’s not getting. That’s just an extra incentive Summer can offer.

Over with Phyllis Summers (Gina Tognoni), she’ll hide her trail. Rey Rosales (Jordi Vilasuso) will be looking into Nikki’s confession story, so Phyllis will want to make sure there’s nothing to connect her to it. That could be tough since they were all at the girls’ night party, but Phyllis will give it her best shot!