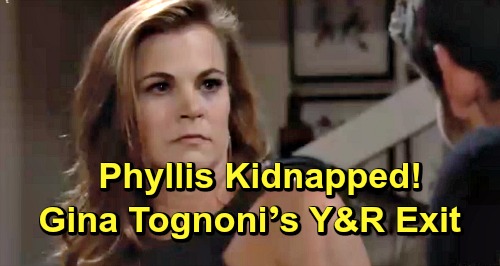 The Young and the Restless (Y&R) spoilers tease that Phyllis Summers (Gina Tognoni) has a rough week ahead of her. Lauren Baldwin (Tracey E. Bregman) recently ordered Phyllis to shut down her counterfeit site or else, so Phyllis should already be feeling down in the dumps. She needed the capital for her real business, but that venture will be put on hold.

Phyllis will throw back a few drinks as she feels sorry for herself. Her unlucky streak will continue when she crashes her car into Adam Newman’s (Mark Grossman). The accident will be minor and there won’t be any injuries, but Phyllis obviously won’t be in any shape to continue her journey home.

That’s why Adam will take Phyllis the rest of the way and make sure she gets settled in back at her place. The Young and the Restless spoilers say Adam will then pitch the idea of forming a partnership. He’ll suggest their alliance will work to each other’s advantage, but he won’t really care all that much about Phyllis’ side of this. Adam’s all about himself and what he wants these days.

Phyllis’ decision could turn out to be a dangerous one since more trouble’s looming. Y&R spoilers state that Phyllis will be kidnapped! Someone masked and donned in all black will sneak up on her. As she’s grabbed from behind, Phyllis feel a hand go over her mouth to stop her from screaming. She’ll be helpless as this person presumably takes Phyllis to an undisclosed location.

Will this have anything to do with her Adam alliance? Y&R viewers will recall that Phyllis did abduct Adam once upon a time. He might have someone return the favor if she gets out of line. Of course, this could be connected to another one of Phyllis’ schemes instead. She’s always stirring the pot, so nobody should be surprised that Phyllis is about to pay the price.

PREVIEW FOR NEXT WEEK! #YR pic.twitter.com/uymnazko1n