BY Heather Hughes on May 30, 2019 | Comments: one comment
Related : Soap Opera, Spoiler, Television, The Young and the Restless 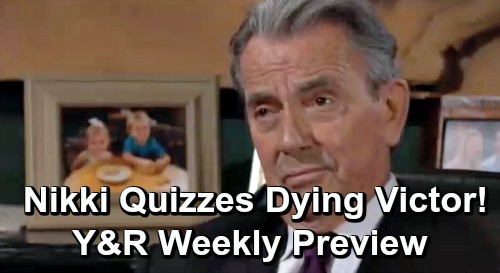 The Young and the Restless (Y&R) spoilers for the week of June 3-7 tease that Billy Abbott (Jason Thompson) and Victoria Newman (Amelia Heinle) will prepare for their recommitment ceremony. At Society, the happy couple will be all smiles as they talk to Johnny Abbott (Holden and Ryan Hare) and Katie Abbott (Sienna Mercuri). Billy will ask if the kids are ready for Mommy and Daddy’s big party.

Katie and Johnny will respond with a very enthusiastic “Yeah!” Abby Newman (Melissa Ordway) will be there to help with any final arrangements and get this shindig started. Nick Newman (Joshua Morrow) will also be on hand with Christian Newman (Jude and Ozzy McGuigen), so it’s clear that this is real family bash. Plenty of Abbotts and Newmans will be at the celebration with their plus ones.

The Young and the Restless spoilers say Summer Newman (Hunter King) will turn a few heads with her hot date, Theo Vanderway (Tyler Johnson). That’ll lead to some conflict eventually. Summer always knows how to push buttons, so expect her to get Kyle Abbott (Michael Mealor) and Lola Rosales (Sasha Calle) riled by the end of the night.

In the meantime, Phyllis Summers (Gina Tognoni) will hear a dangerous pitch. After a fortuitous encounter with Adam Newman (Mark Grossman), a sneaky alliance will form. Their fender bender will lead to a conversation about revenge. Adam will fan the flames of what Phyllis really wants, so she’ll definitely be drawn to this idea of being allies.

Although Adam is most concerned about getting his family back, he’ll see the potential benefits this partnership could bring. Adam will tell Phyllis that he’s wanted to set this town on fire for a long time. He’ll note that he’s got the gas in him and ask if Phyllis would like to be his match.

How can Phyllis pass up that kind of opportunity, especially since she’ll be tipsy during this chat? Adam and Phyllis should move forward as a team soon enough. Across town, Y&R spoilers say Nikki Newman (Melody Thomas Scott) will realize Victor Newman’s (Eric Braeden) health is in trouble. He should know by now that he can’t keep secrets from his wife – at least not for long.

Nikki will grill Victor, but he’ll try to downplay his condition. That won’t work for Nikki, who’ll challenge Victor to look her in the eyes and tell her nothing is seriously wrong with him. Victor probably won’t be able to do it, so it sounds like he may confess that he’s dying. Thankfully, Victor won’t give up. He’ll face this battle with Nikki by his side, so that’ll help him keep hope alive.

PREVIEW FOR NEXT WEEK! #YR pic.twitter.com/uymnazko1n