The Young and the Restless Spoilers: Phyllis Offers To Join Adam’s Newman Family Takedown Team – Can He Trust Her?

BY Sean O'Brien on August 27, 2019 | Comments: one comment
Related : Soap Opera, Spoiler, Television, The Young and the Restless 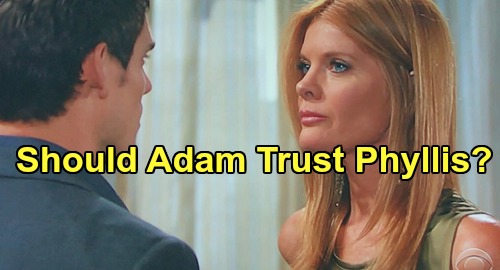 The Young and the Restless spoilers tease that Phyllis Summers’ (Michelle Stafford) offer to join Adam Newman’s (Mark Grossman) team adds a new wrinkle to the bubbling personal battles he’s waging. Of course, Adam’s team apparently only had one member.

Whether Adam has been working alone, or is currently conspiring with Chance Chancellor (as last played by John Driscoll) is something to consider. As this character, who hasn’t appeared on the show since 2011, has surely been referenced this summer for a purpose.

Phyllis claims that she learned information about Adam’s time in Las Vegas, Nevada, including his association with Chance. She didn’t mention that point at the penthouse when making her offer to be part of Adam’s effort to get the Newman’s. But surely he hasn’t forgotten that she’s seemingly withholding some sort of threatening information.

Fans Had Been Teased With A Potential Phadam Pairing

Chelsea told Adam that what he wants most is love. In feeling that he’s unable to have Egan’s character as his wife and in not having regular access to either of his sons, Adam advised Phyllis that he chooses to use negativity as motivation.

Y&R fans were being offered the tease of a potential Phadam business pairing just prior to Gina Tognoni’s (Phyllis) exit from the cast. She joined Adam in crashing Vickie Newman (Amelia Heinle) and Billy Abbott’s (Jason Thompson) ceremony at Society. Shortly thereafter viewers saw Stafford at the Las Vegas setting, which furthered this unusual pairing.

Adam has been unable to convince Chelsea, or Sharon Newman (Sharon Case) of his worthiness as a current romantic partner. So he remains alone. Phyllis also has no significant other. It’s obvious that Adam and Phyllis could opt to pretend to pursue the other in the future, on more than a business basis, as part of each person’s hidden strategy.

Phyllis’ offer to side with Adam gives him the opportunity to gain someone who can’t be considered a trusted ally, but could be useful. By citing her real and perceived wrongs, Phyllis was attempting to convince Adam that she’s as serious as he in fighting the Newman’s. Her intent is to stay near to him in order to seek justice.

Whether Y&R merely has Adam and Phyllis work together, or writes them toward pretend, or real couple’s status is just one compelling angle in this developing storyline. CDL is a leading source for everything linked to The Young and the Restless. Check back regularly for Y&R spoilers and news!