The Young and the Restless Spoilers: Phyllis Plots Vengeful Hookup with Chance – Wants to Hit Abby Where It Hurts, Ruin Another Romance?

BY Heather Hughes on December 11, 2019 | Comments: one comment
Related : Soap Opera, Spoiler, Television, The Young and the Restless 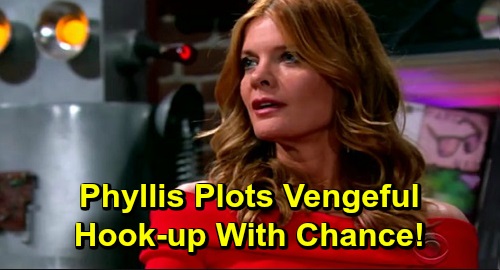 The Young and the Restless (Y&R) spoilers tease that Phyllis Summers (Michelle Stafford) will continue to stew over Abby Newman’s (Melissa Ordway) successful plan to push her out of the Grand Phoenix. She’ll probably fume even more if she learns the details of that plan. Abby went to great lengths with those fake jewelry robberies, and now she’s giving Phyllis’ job to “Chance” Chancellor (Donny Boaz).

Amanda Sinclair (Mishael Morgan) turned down Phyllis’ case and argued that she was a lightning rod for trouble. However, Phyllis shouldn’t let that get to her. Amanda wants to avoid high-profile cases due to whatever troubling situation she’s dealing with. Phyllis is a total attention magnet, so it’s tough to blame Amanda for giving this one a hard pass.

Of course, Phyllis doesn’t know Amanda’s apparently hiding from an abusive ex. She felt incredibly judged by a stranger in that moment, but she managed to shake it off for the most part. Phyllis is who she is! She needs to own that she’s a ruthless schemer who’ll do whatever it takes to get what she wants.

Phyllis recently declared she was out of the scheming business, but most of us never believed that for one second. Y&R fans know scheming is like breathing for Phyllis. It’s involuntary and she has to do it to survive. Phyllis certainly isn’t the kind of woman who’ll sit back and watch Abby’s world be rosy while she suffers in the corner. It won’t be long until Phyllis is plotting her next round of revenge.

During the week of December 16-20, The Young and the Restless spoilers say Phyllis will kick off hr vengeful plan. She’d love to steal back her baby aka the Grand Phoenix, but that may not be an option right now. Will Phyllis try to hit Abby where it really hurts instead?

Many of their fights lately have included low blows about their failed relationships. It’s easy to imagine Phyllis setting her sights on a hot hookup with Chance – just to hurt Abby and leave her furious. That may take some time on Phyllis’ part, but she can be patient when need be. Whether she’s playing the short game or the long game, Phyllis only cares about winning in the end.