The Young and the Restless Spoilers: Predictions For Y&R As 2019 Begins 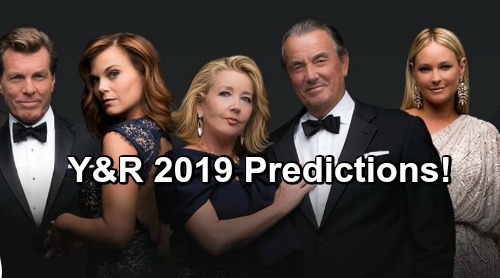 The Young and the Restless spoilers tease that all lives never move in the same direction in Genoa City. Along with that fact, some characters, more than others, have momentum as 2019 begins. So, who are these daytime personalities and how will there lives accelerate in positive ways?

Nikki (Melody Thomas Scott) can’t deny that she’ll face some form of justice in 2019. Her accidental actions should have been reported after J.T. (Thad Luckinbill) died. But Victor (Eric Braeden) has returned and with that a legal solution will be realized somehow.

Meanwhile, Mrs. Newman looks remarkably better shortly after being struck down by the car that Reed (Tristan Lake Leabu) was driving on that dark and snowy night. Recovering from what could have been a tragic accident represents major momentum. And after she’s out of her hospital bed, Nikki will help her family to heal.

Lola (Sasha Calle) will capitalize, as hard-working business owners do, on her great timing by shining as the head chef at Abby (Melissa Ordway) and Devon’s (Bryton James) joint venture restaurant. All who feel this new character was lucky miss the point. Lola was pursuing her perceived life’s vocation on the streets in a food truck and quickly earned success. It wasn’t handed to her.

While Kyle (Michael Mealor) is an option, Fen’s (Zach Tinker) stock is rising fast. He’s been in love with Lola, or so he thinks, since first spotting her pretty face. The same is true with Kyle, but Fen seems more Lola’s style. Having two romantic options, in addition to major career expansion, bodes well during the next twelve months, at least.

Sharon (Sharon Case) made the right choice by telling Nick (Joshua Morrow) to go his own way. While the long-teased Shick reunion seemed certain, Y&R stopped it, via Phyllis (Gina Tognoni), again. Oh well and okay.

Instead of repeating patterns, Sharon has positioned herself well by creating multiple life options. She’s mentally healthy, is handling family responsibilities, is running Crimson Lights smoothly, and is applying her degree through an important job with the GC Police Department.

Like Nikki, Sharon will need to deal with the coming J.T. climax, but appears ready to move forward no matter what happens. She may also do that with Rey (Jordi Vilasuso) once the long coverup crew arc is resolved and if (when) Mia (Noemi Gonzalez) alienates Mr. Rosales, as she’s done in the past.