BY Marcy Cohen on May 21, 2019 | Comments: one comment
Related : Soap Opera, Spoiler, Television, The Young and the Restless 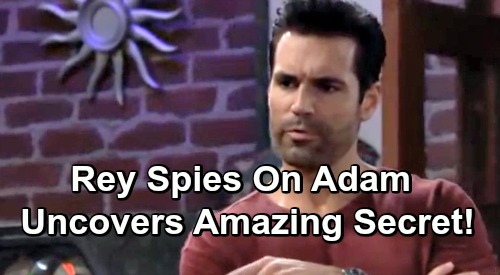 The Young and the Restless (Y&R) spoilers tease that Rey Rosales (Jordi Vilasuso) will find more investigative work. Since he lost his job at the GCPD, Rey’s undoubtedly happy to keep finding these gigs and scoring paychecks. He has a knack for finding people who don’t want to be found and learning buried secrets, so he might as well put his skills to good use.

The problem Rey always winds up caught in the Newman web, and this time will be no different. Nikki Newman (Melody Thomas Scott) tasked Rey with cracking a case in Vegas not too long ago. Rey indeed found answers that led to the truth about Adam Newman (Mark Grossman). He proved himself, so one of the Newmans might rely on him again.

The Young and the Restless spoilers say Rey’s orders will be simple at first, but they’ll become more complicated as time goes on. Rey will start by simply keeping tabs on Adam. He’ll monitor Adam’s activities and try to figure out if the suspicious Newman is hiding anything.

Nikki could easily hire Rey once more if she feels like Victor Newman (Eric Braeden) is being too trusting. However, Nick Newman (Joshua Morrow) and Victoria Newman (Amelia Heinle) are certainly options as well. Even Billy Abbott (Jason Thompson) might hire Rey in hopes of tripping Adam up and putting him behind bars for another crime.

Victor has his own team of Newman investigators, but he could be a possibility as well. He would have a great reason to put Rey on the job. Since Rey is dating Sharon Newman (Sharon Case), Adam could be lulled into a false sense of security. If Sharon trusts Rey, Adam might think he can, too.

Victor currently seems to adore Adam, but he can turn on his loved ones in an instant. There’s no guarantee the love fest with Victor will last. He’s the kind of guy who likes to be careful, so Victor may grow a bit more suspicious of Adam down the road.

Regardless, the important thing is Rey will be hired to spy on Adam. It won’t be long until that mission deepens into something else. Y&R spoilers say Rey will uncover some shockers. He’ll find out info on Adam’s life outside of Genoa City, which might even include locations other than Vegas. Adam is clearly keeping major secrets, so Rey’s bound to stumble across some big ones.

Naturally, Rey’s assignment will cause serious friction with Sharon. She’ll feel like Rey’s targeting Adam and stirring up unnecessary trouble. Rey may keep Sharon out of the loop initially, which could make it seem like even more of a betrayal when she discovers what he’s up to.