The Young and the Restless Spoilers: Rey Inches Closer To The Truth About JT’s Murder – Puts Nikki Under Surveillance

BY hellodrdavis on January 8, 2019 | Comments: 2 comments
Related : Soap Opera, Spoiler, Television, The Young and the Restless 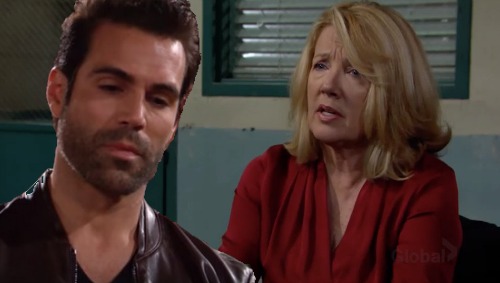 The Young and the Restless spoilers tease that Rey Rosales (Jordi Vilasuso) may be closer to the truth about who killed JT Hellstrom (Thad Luckinbill) than anyone gives him credit for. Rey has spent a considerable amount of time building a case against Victor Newman (Eric Braeden), and he’s currently got Victor under arrest for the crime.

But what’s Rey’s real agenda here? Does he really think that Victor is the person responsible for JT’s murder, or did he want Victor arrested so he could watch the fallout among the other suspects on his list? We know that from the beginning, Rey pinpointed the girls’ night gathering as the last place that JT was seen alive.

When Rey first appeared on the scene, he was considering Nikki Newman (Melody Thomas Scott), Sharon Newman (Sharon Case), Victoria Newman (Amelia Heinle), and Phyllis Summers (Gina Tognoni) as people of interest in the case. He had their pictures on a wall with lines all pointing to a picture of JT.

And he purposely got Sharon a job at the Genoa City Police Department because he determined she was the weakest link in the girls’ night gang. He wanted to keep an eye on her and watch how she reacted to ongoing developments in the JT murder investigation.

And then all of a sudden, Rey started focusing on Victor as the prime suspect. Sure, he may think that Victor killed JT at or after he left the girls’ night party, but perhaps there’s something else going on here. Perhaps Rey has arrested Victor in order to see what all the girls’ night members do in response to the arrest.

Rey might be thinking that, by arresting Victor, he might get the real killer to come forward and confess, in order to save Victor from prosecution. And that almost worked; Nikki nearly decided to confess to the crime to get Victor off the hook.

Could Rey have a secret suspicion that Nikki is the person who killed JT? Y&R spoilers say that someone will soon have Nikki under surveillance. It’s hard to imagine anyone other than Rey wanting to place Nikki under a watchful eye. He may be thinking that Nikki may do or say something that will implicate herself, now that she’s rattled by her husband going down for a crime that she committed.

Do you think that Rey actually suspects Nikki at this point? Stay tuned to the CBS soap and don’t forget to check CDL often for the latest Young and the Restless spoilers, updates, and news.