The Young and the Restless Spoilers: Rey’s Perfect Match – Which Lovely Lady Does Handsome Detective Belong With? 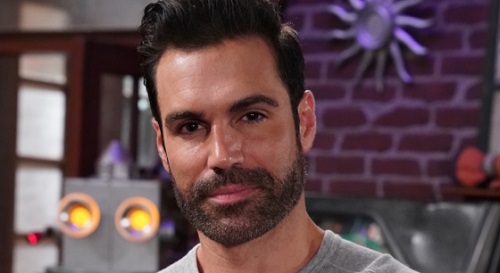 The Young and the Restless (Y&R) spoilers reveal that one CBS soap character has several romantic options. Rey Rosales (Jordi Vilasuso) is a big brother to Lola Abbott (Sasha Calle), but that’s the extent of his current family connections in Genoa City. It’s nice for Y&R to have at least a few characters they can mix and match with just about anybody.

Rey recently reunited with Sharon Newman (Sharon Case), but that doesn’t mean it’ll last. It sort of feels like Y&R writers just couldn’t figure out what else to do with Sharon and Rey at the time, so they stuck them back together. Of course, there are plenty of “Shey” fans out there who are rooting for a lengthy romance this time.

Do you think Sharon and Rey a nice pairing or would you rather see Rey with someone else? If you choose the latter, there’s no shortage of ladies for Y&R to try with Rey. He ended up back with Mia Rosales (Noemi Gonazalez) after she showed up in town, but his heart was always with Sharon. In fact, Sharon has been the only woman Rey showed genuine interest in since his debut in 2018.

At first, the angst between Sharon and Rey brought some sizzle. He was the lead detective on the J.T. Hellstrom (Thad Luckinbill) case, and Sharon was working hard to keep the cover-up under wraps. It was fun to see a juicy secret between them as they struggled to fight their feelings. Rey later arrested Sharon, so that was about as soapy as it gets!

However, all that drama has dried up. Perhaps it’s time for Sharon and Rey to explore other possibilities in Genoa City. Since we’re focusing on Rey, who else could he be paired with? Victoria Newman (Amelia Heinle) might be a good choice. Their scenes on December 3 seem to be a bit of a chem test, so who knows? Maybe The Young and the Restless fans will see “Vey” at some point.

Rey also chatted with Amanda Sinclair (Mishael Morgan) at the Thanksgiving event for the homeless. Some Y&R viewers couldn’t help but notice that they looked awfully good standing next to each other! Amanda probably has too many other men swirling around her right now, but anything can happen down the road.

Nevertheless, some Young and the Restless watchers are holding out hope for a Rey and Abby Newman (Melissa Ordway) pairing. Abby’s interested in “Chance” Chancellor (Donny Boaz) at the moment, but do they have enough of a spark to last long-term? Rey and Abby might be a far steamier match.

Since Arturo Rosales (Jason Canela) is Abby’s ex and Rey’s brother, that’d add another interesting layer to this romance. If Arturo pops up for another visit, it could create some serious waves. As the brothers’ peacemaker sibling and Abby’s friend, Lola could get caught in the middle.

What do you think Rey’s romantic future should look like? Should he stick with Sharon or be paired up with a new woman? The Young and the Restless spoilers say some great drama’s brewing no matter what, so stay tuned. We’ll give you updates as other Y&R news comes in. Stick with the CBS soap and don’t forget to check CDL often for the latest Young and the Restless spoilers, updates and news.